The moment many of us have been waiting for is here! After receiving a spectacular response for the power-packed trailer of ‘Gulaab Gang’, the makers of the film have released the title track ‘Gulaabi’. The song features the leading ladies, Madhuri Dixit and Juhi Chawla, who are all geared up to stand strong against each other.

Set against the background of elections, the energy of the song is backed with powerful vocals by Malabika Brahma and Shilpa Rao. The tension brewing in the title song sequences rises as it progresses, ending to an action-packed climax. Madhuri Dixit who plays the role of ‘Rajjo’, a fierce leader of Gulaab Gang, fights against the evil politico ‘Sumitra Devi’ played by Juhi Chawla. The lyrics of ‘Gulaabi’ have been penned by Neha Saraf. The director of ‘Gulaab Gang’, Soumik Sen, has composed the music of the film. 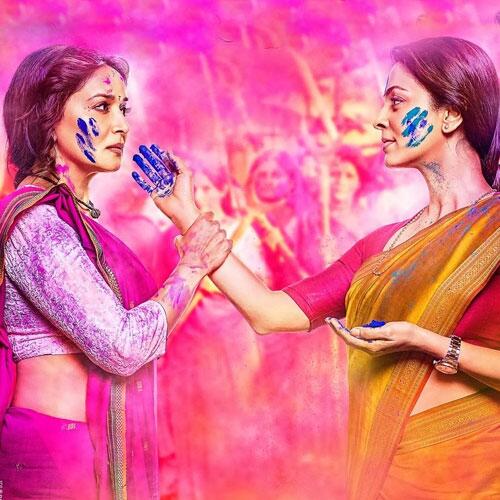 The high-octane film is inspired by a group of women social activists (Gulabi Gang) in Bundelkhand and is based on women empowerment. Produced by Anubhav Sinha, ‘Gulaab Gang’ is presented by Sahara Movie Studios & Bharat Shah and is a Benaras Mediaworks Production. The film is slated to release on the 7th of March. What do you think of the song?