Divya Dutta had a magnificent 2013, as she was seen playing powerful characters in some of the most noteworthy films of the year. In recognition of her hard work and remarkable performance, it has been raining praises for her. She has been nominated for the Best Actress in a Supporting Role category, at the Star Guild Awards 2014 and 59th Idea Filmfare Awards. 20th Annual Screen Awards 2014 has named Divya among the nominees for both ‘Bhaag Milkha Bhaag’ and ‘Gippi’. 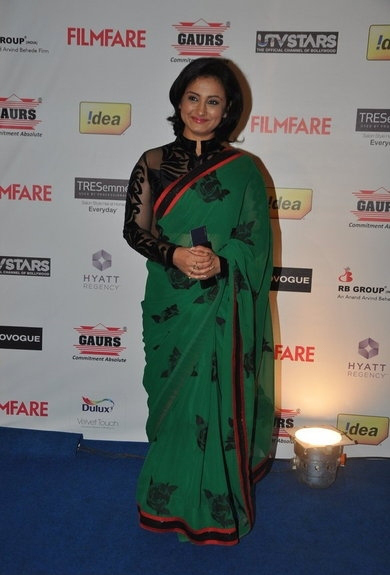 Divya has been appreciated as Milkha Singh’s sister Ishri Kaur in ‘Bhaag Milkha Bhaag’, a role which moved actor Farhan Akhtar to tears. This challenging role, which was essayed by the talented actor with grace, was also lauded by the audience. The talented actor also played the role of a doting single parent in ‘Gippi’ and convincingly won the audiences’ hearts with her endearing performance. Divya effortlessly expressed an extensive range of emotions that a mother goes through. The film shows a heart-warming mother-daughter bond between Divya Dutta and Riya Vij, which is beautifully laid out on-screen. Divya had earlier mentioned that she took inspiration from her mother to play this character.

Commenting on her multiple nominations, the ecstatic actor said,

“It’s always lovely to have your work recognized. 2013 was a good year for me, and I feel really fortunate to have had the opportunity to portray such diverse and powerful characters.”

Apart from this, Divya was seen in the critically-acclaimed films like ‘Special 26’ and ‘Zilla Ghaziabad’ last year, and won many accolades for her sincere performance.