After topping the world music chartsand playing alongside Wynton Marsallisat the Marcaic Jazz Festival in front of an audience of more than 10,000 people, the Sachal Studios Orchestra is back with ‘Jazz and All That’ released on November 18th – an album of their unique interpretations of jazz and beyond.

Performed by virtuosos who cut their teeth in Pakistan’s once-flourishing Lollywoodfilm industry, ‘Jazz and All That’ brings together the most accomplished classical musicians of the subcontinent to play jazz classics– with a few surprises thrown in for good measure. As the Evening Standard said after their sold-out performance at the Queen Elizabeth Hall last year, it “ought to be wrong but sounds so right”. 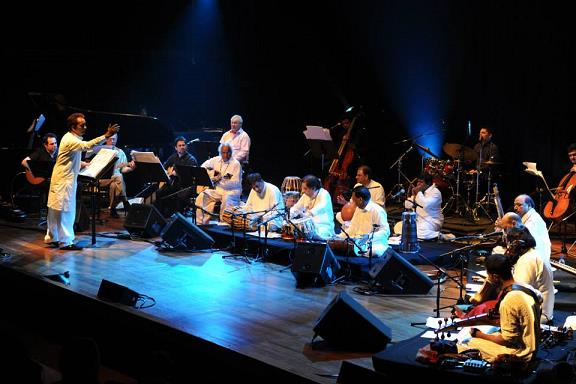 ‘Jazz and All That’ follows the success of their first album ‘Interpretations of Jazz Standards and Bossa Nova’, released last year, which included their famous take on Bruebeck’s Take Five. The Single held the top spot on the iTunes world music chart in the US and UK from July- September last year, and the video became an unexpected YouTube sensation.

The Sachal Jazz project is the brainchild of London-based Pakistani businessman Izzat Majeed. He tracked down the best musicians of Lollywood’s heyday, once revered but now hanging up their instruments in a more conservative Pakistan, and got them into the studio once again

‘Jazz and All That’ showcases the best of East meets West. It includes jazz standards that can’t fail to delight – try and listen to the Sachal Studios Orchestra’s rendition of The Pink Panther Theme without smiling – but there are some unexpected pleasures there too, including tracks by Stevie Wonder (You’ve Got it Bad Girl), The Beatles (Eleanor Rigby) and REM (Everybody Hurts). The video of their interpretation of Everybody Hurts is already clocking up views on YouTube. “Jazz and All That” was released November 18th on Sachal Music.