It was quite a sprint and now the shooting of Running Shaadi.com is complete! The film is a young romantic comedy starring Amit Sadh (Kai Po Che!) and Tapsee Pannu (Chashme Baddoor) in the lead roles. The film went on floors in in end October and the start-to-finish Patiala schedule ended on December 10. 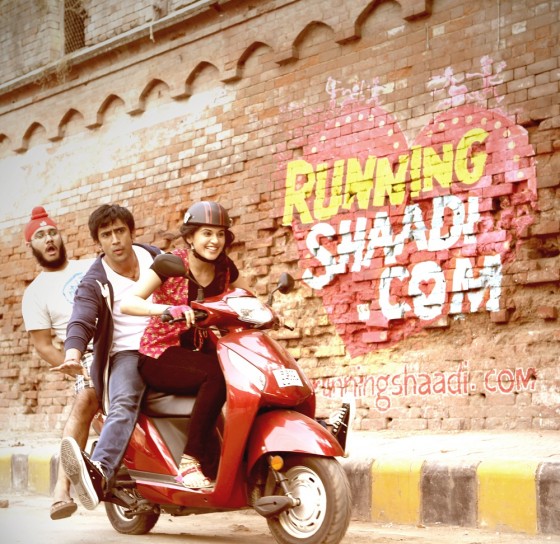 The film is directed by first-timer Amit Roy, who has previously worked as a cinematographer in films like Sarkar and Dum Maaro Dum. Running Shaadi.com is produced by Vicky Donor’s director Shoojit Sircar and his partner Ronnie Lahiri (Rising Sun Films) and co-produced by Crouching Tiger Motion Pictures.

Running Shaadi.com revolves around a website which helps people elope and get married. When Ram Bharose (Amit) and Nimmi (Tapsee) fall in love while on the run, one hilarious situation leads to another and they have to handle their own running shaadi. Add to that a wide array of unique characters make for an endearing light-hearted story. With Sircar himself being the creative mentor on the film, Running Shaadi.com has a headstart.

“We at Rising Sun Films are committed to making entertaining cinema and this film fits the bill perfectly. We had a fun, fast shoot and now we are getting into post-production to finish the film.”

“Running Shaadi.com has been a fabulous experience with like-minded people coming together. I hope the audiences have as much fun as we had making the film.”

“We didn’t even realise when we started the shoot and when we finished it. Now I can’t wait to watch the ready film on the big screen. It’s going to be a winner.”

Running Shaadi.com will run to theaters in mid-2014 so keep it locked on Urban Asian fore more updates!