It’s not everyday we see many female artist making it and when they do they are really good! Wish we had more female talent exposure! Well we couldn’t resist telling you about one pop singer who has been making a buzz in the Asian and Pop world! 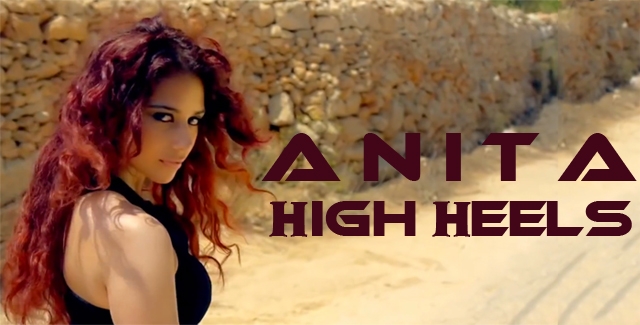 London based pop singer has just debuted her first music video for ‘High Heels’ the song gained popularity after DJ Nihal invited Anita to do an acoustic session on Radio 1 earlier this year. To date, the acoustic session has gained over 150,000 views on youtube!  The video was directed by Razor Edge, whose recent successes include a Christmas Number 1 with ‘Military Wives’. The video, filmed against the luscious backdrop of the island of Malta, steps into short film territory, as an homage to ‘The Wizard of Oz’.

“I didn’t grow up thinking I could be a pop star, because I come from a completely non-musical family. All I knew for sure was that singing was the best feeling in the world, and that I wanted to be Michael Jackson”.

What Anita did grow up to be, was an all singing, all dancing pop starlet in the making. Born and bred in London, England, but of Indian descent, Anita’s exotic looks and multicultural upbringing have provided her with a wealth of content for her songs, and ideas and inspiration that she has poured into the masterminding of her career, including co-directing her music video début, ‘High Heels’.

“I didn’t go to a stage school, just a regular one, so I had to take every opportunity to stand out-I would force musical sections into the school assembly just so I could get up and sing! I had so many different influences in my head like MJ, Sam Cooke, and Mariah that I soon realized what I wanted to become. I was still at school when I did my first audition, and landed a management deal. The next thing you know, I had formed a girl group with my friends, and that’s when the roller-coaster began!”

That girl group was Serese, who went on to perform all over the world including opening the MTV awards in Asia, getting sponsorship deals with Swarovski, Applebottoms, and Adidas to mention a few, and working with industry greats such as songwriter Wayne Hector! Now, after a natural progression, Anita is ready to make an impact on pop music, along with her mentor and manager Richard Pascoe of RP Management.

Check out High Heels and tell us what you think!