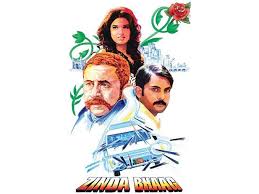 The crowning glory of the Mosaic International South Asian Film Festival (MISAFF) 2013 is an Indo-Pakistani collaboration by film makers Meena Gaur and Farjad Nabi – Zinda Bhaag– and stars none other than great Indian baadshah, Naseeruddin Shah. The world premiere will take place right in Mississauga, Canada at the Empire Theatre at Square One on Aug 14 at 9:00 pm sharp! It promises to give you a run for not only your money but life as well.

MISAFF has expanded and developed tremendously over the last seven years. By hosting the world premiere of a world class South Asian movie, it has actually put Mississauga in Ontario, Canada on Bollywood’s map. This 7th edition promises to be one of the biggest and best we have seen as it includes thought-provoking feature films, documentaries and shorts from around the world.

“The themes that dominate the festival this year are women’s empowerment, political action, human rights, poverty, youth and sexuality. These are extremely relevant to the times we live in and have universal appeal no matter where we live or come from. This is a perfect match for the multicultural fabric which makes up not only Mississauga but the GTA as well.”

The closing night film on Aug 15, is the Mississauga premiere of the critically acclaimed film by Mira Nair, The Reluctant Fundamentalist (novel by Mohsin Hamid). Another unique opportunity to see this important movie which resonates with the communities affected by the US ‘war on terror’ in a most dignified and beautiful manner. It is another fine example of Indo-Pakistani filmmakers collaborating on a meaningful project that resonates with the South Asian diaspora.

It is really no coincidence that the Indo-Pakistani film collaborations being screened, fall right in the spirit of the independence day of both countries within the festival’s dates this year. But true to its international nature, the festival includes short films and documentaries from all around the world including Canada, USA. UK, Denmark, and Trinidad.

Two other star attractions are the films Aayna ka Bayna, a Marathi non-stop dance film by Samit Kakkad making waves on the international film festival circuit. It is about nine boys who are trapped in a draconian remand home and dream of finding their identity through street dance. The movie has won several awards including one for best choreography at the Zee awards ceremony. A charming film from New Delhi, Listen… Amaya by Avinash Singh is a beautiful example of how good films can be made everlasting and universal in spirit. The film explores love, life, and mother-daughter relationships. The treatment of the theme is special as are the songs and the cast which include veterans from the art film world Farooque Shaikh and Deepti Naval. A delight for all art film lovers to see these two together in a film after almost 2 decades! It received rave reviews at the London Asian Film Festival and the Chicago South Asian Film Festival.

The documentaries include New York filmmaker Omar Mullick’s film These Birds Walk, making its debut here in Mississauga before moving on to limited theatrical release Canada wide- a unique opportunity to see this Hot Doc film awards recipient at no cost. The film is about the great humanitarian Abdul Sattar Eidhi and his work in Pakistan that will win over audiences.

Chuppan Chuppai (Hide and Seek) is a documentary that explores Lahore’s LGBT community told by the people depicted in the film without heavy-handed editorial manipulation of the subject matter. It is a candid and frank look at the life and times of LGBT people living in a highly homophobic and conservative country.

The variety and the range of films being presented this year at MISAFF are thought provoking, emotive and will definitely pull at your heartstrings. Although most films are free screenings at the Living Arts Centre’s Roger’s Theatre, Zindaa Bhaag (Aug 14th , 9.00 pm sharp) and The Reluctant Fundamentalist (Aug 15th, 9.00 pm sharp) are ticketed films at Empire Theatres, Square One, Mississauga, Canada, so make sure you run right now and grab your tickets before it is too late!