One of the world’s leading entertainment TV channels and Film Distribution Companies’, B4U has been named the overseas theatrical distributor for this summer’s most eagerly anticipated Once Upon A Time In Mumbai Dobaara (OUATIMD) releasing on15th August 2013. The film is produced by Balaji Motion Pictures.

Bad really is the new good as Once Upon A Time In Mumbai Dobaara sees Akshay Kumar make the transition from the role of an archetypal hero to a flamboyant bad boy, Shoaib. He is joined by Imran Khan (Aslam) and Sonakshi Sinha (Jasmine). The film also sees the return to the silver screen of Sonali Bendre (Mumtaz) in a cameo, after a hiatus of almost ten years. 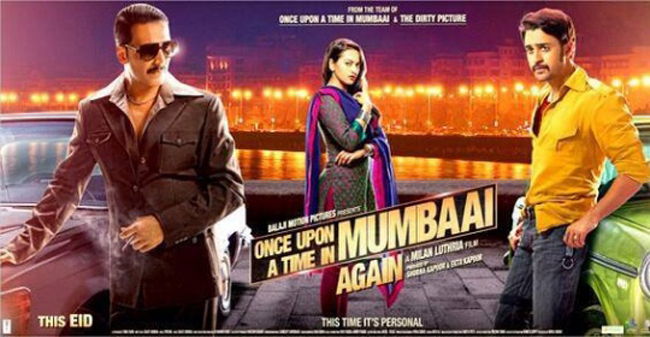 Remarks Tanuj Garg, CEO – Balaji Motion Pictures, “We look forward to our association in the overseas with B4U, which is among the most formidable entertainment platforms. Balaji and B4U will utilise their collective marketing muscle to derive a strong result for this hugely awaited film.”

Milan Luthria, who directed the first instalment of Once Upon A Time In Mumbaai and India’s most celebrated film of 2011, The Dirty Picture, has created this romantic drama shot partly in the Sultanate of Oman, and largely in Mumbai, recreating the 80s. The stirring musical score has been created by Pritam.

Says Sunil Rohra, Global CEO, B4U, “B4U is very excited to partner Balaji on their biggest film of the year, and is looking forward to be part of the hugely successful Once Upon a Time in Mumbai franchise, dobaara. We will bring our entire theatrical distribution expertise for the release of the film in global markets, besides backing it with our television platforms to make it a huge success.”

Since its inception in 1999 as a fledgling music and movie satellite portal, B4U has catapulted itself to become one of the world’s most watched entertainment TV channels, which is dedicated to all things Bollywood. The network operates three key channels – B4U Music, B4U Movies and B4U Mobile, which are at present available on more than eight different satellites, in more than 100 countries including the USA, UK, Europe, the Middle East, Africa, Mauritius, Canada and India. The collaboration with Akshay Kumar starrer Once Upon A Time in Mumbai Dobaara seals the channel’s status as a leader in the competitive global entertainment space.

Once Upon A Time In Mumbai Dobaara releases overseas on 15th August 2013 through B4U.