There are some collaborations that you know will be sizzling just by reading the names of the artists/producers who worked on the track.  Such is the case for “Oh Penne“, which features the vocal talent of R&B British sensation, Arjun, as well as the production talent of the music producer of Kolaveri Di – Anirudh, as well as British producer Charles Bosco!

After delivering back to back hits in South Indian films ‘3‘ and ‘Ethir Neechal‘, one of India’s young rising production talents is back with his 3rd film album. After the phenomenal global success of ‘Why This Kolaveri Di‘, which has over 80 million hits on YouTube, producer Anirudh Ravichander is back this summer with songs from the forthcoming Tamil movie release ‘Vanakkam Chennai‘.

What is especially unique about this new movie release is that the lead song ‘Oh Penne‘ has an extra international “umph” factor!  To add even more spice to an already hot track, Anirudh teams up with British R&B sensation Arjun and producer Charles Bosco.  Anirudh discovered Arjun’s immense singing talent following the incredible success of Arjun’s UK remix of ‘Why This Kolaveri Di‘.  After hearing the track, Anirudh invited Arjun and Charles Bosco to work on new music in India, fusing his South Indian film style with their unique British R&B sounds. 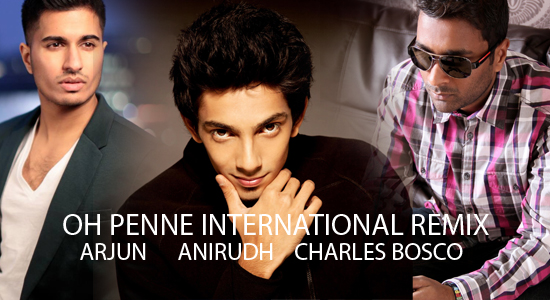 The ‘Oh Penne’ (International Version) will be part of the official soundtrack of ‘Vanakkam Chennai’, releasing on Sony Music India.  The song heavily features Arjun’s trademark slick pop vocals, with rewritten English lyrics, over a laid back beat with additional Tamil vocals adding an authentic international feel to it, the culmination of a unique east meets west collaboration. The original Tamil version, of ‘Oh Penne’, also produced by Anirudh, was sung by Vishal Dadlani, one half of Bollywood’s hit duo Vishal-Shekhar, responsible for some of the most successful Bollywood songs in the last decade. Arjun’s vocals also feature with Vishal on the original version of the song.

‘Oh Penne‘ is the first of a new wave of international music set to feature in the growing South Indian film industry ‘Kollywood‘, spear-headed by British duo Arjun and Charles Bosco. Producer Bosco now has credits in several Tamil films and will be continuing his work in India and London this year. He has also teamed up with the Co-Founder and Chairman of Lebara Mobile, Ratheesh Yoganathan, to launch some exciting projects for the youth via the Bosco Academy in the near future.

What do you think of this international collaboration?  Did it make you say “Oh My, this is amazing?” or did you go “Oh No!”  Let us know your thoughts below!