MOSAIC’s Bollywood personality this year will be none other than female playback singer Harshdeep Kaur, crowned as the ‘Sufi ki Sultana’ by no less a mortal than the mighty Big B himself- Amitabh Bachchan! 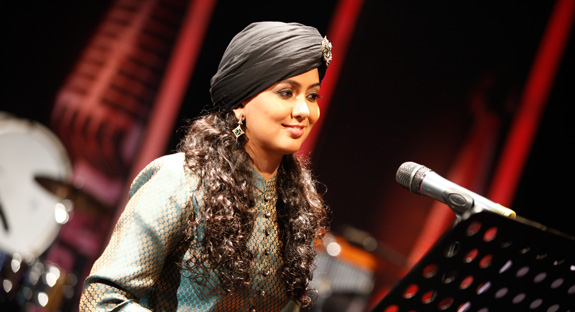 Harshdeep is a young versatile Indian playback singer better known in her early days for her soulful Sufi singing who has now made her mark in Bollywood and is a well-sought after playback singer. Who can forget her heart rending ‘Ik Onkar’ in the 2006 Bollywood blockbuster ‘Rang De Basanti’? And what about her rendition of ‘Katiya Karoon’ from super –hit film ‘Rockstar’ that won her nominations for best female playback singer at both the Filmfare and IIFA awards in 2011? Besides these amazing songs she has recently sung ‘Heer’ in ‘Jab Tak Hai Jaan’ and ‘Kabira’ from yet another Ranbir Kapoor hit ‘Yeh Jawani hai Diwani’. She has also made her mark with big time songs like ‘Jugni’ from ‘Cocktail’, ‘Jhak maar ke’ from ‘Desi Boyz’, ‘Luni Hasi’ from ‘Luv Shuv Tey Chicken Khurana’ and numerous more.

Canadian audiences saw her at AR Rahman’s Jai Ho World Tour and now Harshdeep makes a full concert appearance for Mosaic festival. Harshdeep has selected some of her top Bollywood hits and a number of Sufi songs. She will also be paying a special tribute to the Queen of Melody (Malika-e-Tarannum) Noorjahan, the great playback singer and actress from the subcontinent, with a unique medley of her songs.

This will be a FREE *al fresco* concert at Celebration Square on Saturday Aug 17, 2013 at 7.30 pm, so come early to position yourself advantageously and also to partake of the various stalls, kiosks and vendors who will be on hand selling curios, costume jewelry and other knick-knacks. Plenty of food vendors will also be offering taste-bud tantalizing fare! And of course there will be the ubiquitous henna stalls! Be sure to check out the details on their website!