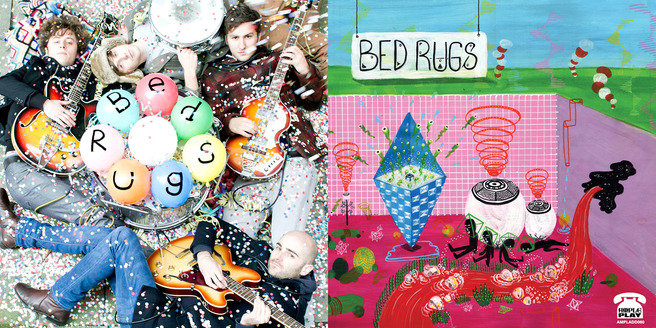 Bed Rugs are paraded in the same catalogue as Tame Impala, Deerhunter, The Paperhead and The Sufis.  Their new album ‘Rapids’ is produced by Paul Butler (The Bees, Devendra Banhart & Michael Kiwanuka).

“There’s elements drawn from many places, and although there’s an overriding 60s tone, they still pull aspects from other decades and genres to ensure that they keep up to date with the modern world”

To The Rocksucker, the new album is,

Gary Crowley from Amazing Radio believes it is,

“Terrific stuff…one of my very favorites of the moment”

Click here to buy ‘Rapids’ in the format of your own choice: MP3 – VINYL – CD

If you still want more, you have the chance to see Bed Rugs live UK debut: The MacBeth Hoxton London 14 June 2013 with a FREE entry!

Can’t get enough of Ample Play Records? Here’s a first listen on their other albums: The Sudden Death of Stars, Think The Byrds, Fairport Convention, Velvet Underground, and Spacemen 3: