After leaving audiences spell bound with the trailer, the makers of Raanjhanaa have released the first song of the film ‘Tum Tak’. The music album of the film has been one of the most anticipated, with the Oscar-winning A. R. Rahman composing the music for the film. Featuring the lead couple- Dhanush and Sonam Kapoor, the newly released song has already taken off on a high note! 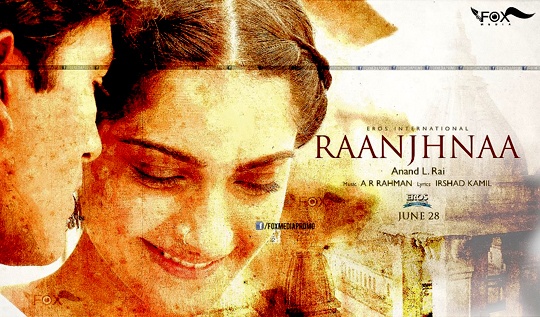 Tum Tak portrays Sonam Kapoor in a new avatar alongside Dhanush, who marks his debut in Bollywood with the film. Set in Benaras, Dhanush plays the role of Kundan, a love-struck boy whose world starts and ends with the beautiful Zoya Sonam Kapoor. The song beautifully captures the love story between the duo, the breathtaking backdrop of Benaras and of course the soothing music of Rahman.

Directed by Aanand L Rai, Raanjhanaa is scheduled to hit the theaters on 21st June, 2013. With online platforms already going abuzz with the first look of the film and its music, this love story for all ages is certainly one of the most awaited releases of the year. Add some magical Tum Tak in your life today!