Jewel of India will be celebrating Doctor’s Day in Delaware.  This is the first time an upcoming Indian organization is going to honor doctors for all the hard work they do throughout the year!  The event will feature an entire evening of music and dance, as well as a fashion show!  In addition, a South Asian Prince/Princess 2013 pageant has been planned says CEO of Jewel of India, Juhi.  Being  a physician herself and Mrs Delaware International  2010 it comes naturally to her to combine this concept.  There are 5 participants each in the Miss/Mrs/Mr categories who will compete for SAPNA 2013 (South Asian Prince/Princess North America). 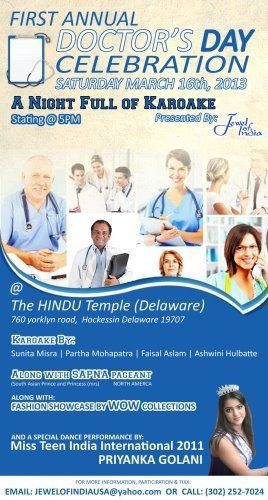