VIP Records proudly announces the return of DJ Raj, one of the most energetic, multi-talented, and without a doubt one of the most promising to emerge in recent years with “Nachdi.” 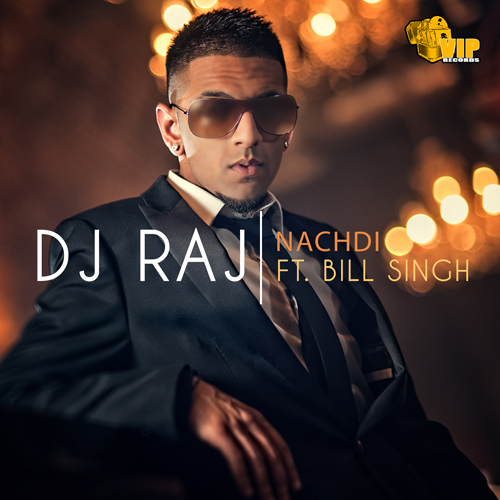 Beginning his DJ’ing career at the age of 14, DJ Raj was given the exposure he needed in order to display his determination and abilities to entertain. With this experience, he picked up what he describes as the ‘secret’ to his performances- excellent crowd judgement.  If you know what drives people, why not give them what they want?

Officially known as UK’s youngest, professional mainstream wedding and club DJ, he has performed in some of the most renowned clubs and wedding venues as an integral part of the world-renowned discotechque company- Calibar Roadshow. Having toured throughout UK and internationally in places such as Canada, LA, Dubai, Amsterdam and India, it is safe to say that the progress made so far is only a fraction of what he has set out to achieve. Wowing crowds all over UK with his unique DJ and hosting skills not only has the DJ worked, but also recommended by the likes of; Jazzy B, Aman Hayer, H Dhami, Garry Sandhu , Imran Khan, Neyo , Tim Westwood, Mario, Jeremih, Jagged Edge, Sean Paul, and many more.

Producing an album has always been an interest from his teenage years and he is set to achieve this feat in 2013.  After releasing the biggest pre-wedding anthem of 2012, ‘Jago‘ ft. Bakshi Billa & Sarbjit Kaur hit charts worldwide with over 220,000 YouTube Views, only 6 months into the release. It wouldn’t require a handful of guesses to predict what was next on Dj Raj’s agenda; he starts the year with the sole purpose of producing the biggest dance floor anthem of the year, and without further ado, he brings to you the second single off the album – ‘Nachdi’.

Dj Raj wanted to make his own stamp on the industry, which can often only be achieved by bringing a new untried vocalist to the table, similar to the way Dj Sanj has lucratively embraced the talents of Jay Status. Nachdi features the raw punjabi vocals of ‘Bill Singh’, and with a video shot by Plan B Productions, as an all round package it is set to do damage. ‘Nachdi’ is ready to be released on 21st February and is the second release from the first album “The Debut!”