‘Khanda’ third track on Popsy Nandha’s Album Hyper is here! EXCLUSIVE to Urban Asian so here it is for you guys, so check it out! Don’t forget to purchase your copy of this amazing album with banging Dancefloor tunes on http://itunes.apple.com/gb/album/hyper/id404289105 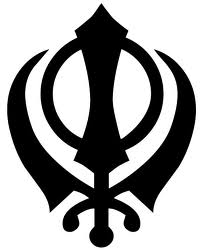 The Khanda is a Religious symbol for Sikhism.The two-edged sword (which itself is known by the name Khanda), circled by the solid circle known as a Chakra.  The right edge of the Khanda symbolises freedom and authority governed by moral and spiritual values.  The left edge of the double-edged sword symbolises divine justice which chastises and punishes wicked oppressors. The Chakra being a circle without a beginning or an end exhorts the Sikhs to make the whole creation as the object of their compassion and activities.  It signifies the symbol of Ek Om Kar, the Oneness of God, who is without beginning or end.  The circle signifies oneness, unity, justice, humanity and morality.  The Chakra was also used as a weapon against injustice and oppression. The two Kirpans (swords) flanking the Chakra represent the two swords of Guru HARGOBIND signifying the spiritual and temporal leadership of Gurus. Apart from giving it symmetry, the two Kirpans impart a conceptual balance to the Khanda like the Yin and Yang of ancient Chinese philosophy.  The left side signifies the sword of spiritual sovereignty or Piri.  The right sword signifies the sword of political sovereignty, Miri.

Popsy has wowed us with the amazing ‘Naag 2’ (which became this Years Number 1 Bhangra Track in the World) music video and now he brings us ‘Khanda’. So here we have two of Popsy’s EIGHT music videos! I am HYPER and cannot wait for the other six!

REMEMBER: if you have talent and think you got what it takes to be the next superstar! get in touch with ‘The Music Machine’ himself on info@popsymusic.com