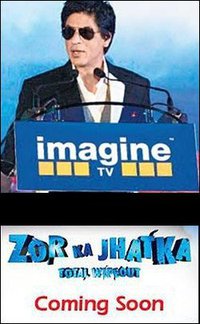 Looks like “Bandini'” is going to get a “Zor Ka Jatka! Bandini is being taken off the air and King Khan’s show will be taking it’s spot on February 1st. The show, produced by Endemol India will be a fear-factor type show that airs daily from Monday to Thursday.

Rakht Sambanth which airs between 10pm and 11pm has high TRP’s but it will be moved to a different time slot to make room for “Zor Ka Jatka.” None of the other shows will not have time changes at this time.