Paging all single UA readers!  Are you sick of searching for your soul mate on a dating web site like Shaadi.com or Bharatmatrimony.com?  Well, there’s a new site on the block – www.HinduPunjabiMatch.com – which may be the answer to your dating woes.  I recently talked to the site’s founder, Manish Kataria, to discuss this new venture. 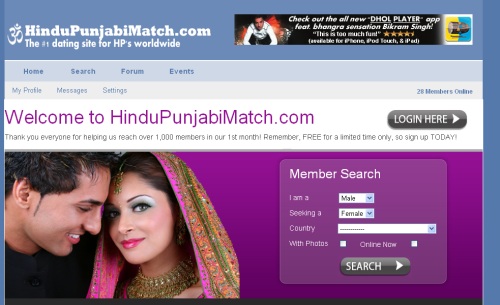 UA: Hi Manish, you recently launched a dating web site called “Hindupunjabimatch.com.”  What got you interested in making your own dating website?  Have you always been a bit of a matchmaker?

MK: Well, to be honest, it’s not something I had been particularly interested in or planning, but I saw an opportunity in the marketplace and decided to go for it. For one, I’m at that age where a lot of my friends and family are getting married or at least into serious relationships so dating, weddings, etc. is just always top of mind. I also worked in digital marketing/advertising for several years and have always been interested in the online space, so between the two it just sort of came together!

UA: What is your favorite Holiday?  Is it Valentine’s Day (the holiday of love), Halloween (where you can “dress up” as Cupid – though we all know you’re really him), or one of the other Holidays? Sorry, if I’ve blown your cover to the world.

As much as I do like both of those, I don’t think I can pick either as a favorite! If you ask most of my friends, they’d probably tell you that I’m really not your typical matchmaker, but with my new venture I guess I get to be one year round regardless of holidays!

UA: I know that you live in NY, where life is fast-paced and (despite it being such a big social hub) people often don’t have time to relax and mingle.  Did living in such an environment inspire you to create the dating site?

Living in NYC was absolutely part of my inspiration. In today’s day and age “online dating,” especially in trendy and urban areas like New York, has become far from taboo.  So although there are a lot of venues and outlets to meet people, it seems like work and other obligations wreak havoc on people’s social calendars, leading them online in search of finding someone special. I have plenty of friends and family who have had similar experiences, and it definitely helped me realize how strong the market was for a site such as this.

UA: In a world that has become very reliant on online dating sites to find love, do you think that your site will be better suited than larger sites like Shaadi.com, Match.com, etc. to help people find their soul mates, and why?

Excellent question, and unfortunately the answer isn’t very black or white. At the end of the day, it depends on individual priorities and how much importance one places on finding a partner of a specific background – in this case the Hindu Punjabi background. If it’s considered high on the priority list, then I’m 100% confident this site will be better suited than some of the larger conglomerates – especially as we grow our membership base.

To better understand my point, I think it helps to consider the parallels of HPM members to those who join sites like SikhMatrimonials for the Sikh Community or Jdate for the Jewish community. However, if the background factor is low or non-existent on the priority list, then naturally other options may be better suited for those people.

UA: Since this is a new site, can you please elaborate a bit about some specifics of the site and your target audience?

As the name indicates, the site was launched to help the target audience of Hindu Punjabi’s connect with one another and help those who would like to meet Hindu Punjabi’s find them more easily than on some of the larger dating/matrimonial sites. That in itself eliminates the need for much of the ethnic-based matching options that are so prevalent on other sites, especially ones geared towards South Asians.  As we’re still relatively small in size for now (at about 1,000 members), any necessary screening is manual and custom match settings are limited to gender, age and location preferences. However, this current member base was achieved in under a month, so we’re anticipating strong growth and, as we grow, so will the sophistication with which we try to connect our members to one another.

While the focus is on Hindu Punjabi’s, anyone interested in meeting Hindu Punjabi’s is more than welcome to join. Opening it up further beyond that takes away from the main purpose of the site and would create a broad platform already covered by outlets like Shaadi & Jeevan Sathi. That being said, I also think there are plenty of large niche Hindu and even non-Hindu South Asian communities that could benefit from a dedicated platform to meet others of a particular background, so already thinking about follow up sites!

UA: One question every one wants to know regarding dating sites is how much will it cost?  If you have any promotional offers for new members, feel free to mention them.

Well I’m happy to report that for now, HinduPunjabiMatch.com is 100% free to join! However eventually – and I don’t have an exact answer as to when – it will follow the cost models of some of the other popular dating and matrimonial sites. So if you’re interested, the time to sign up is now!

UA: Everyone has multiple facets to their personalities.  Besides being Cupid, you’re a dholi!  What got you interested in music and specifically bhangra?

Well being Punjabi, how could I not love bhangra music?! And this passion for bhangra music and being a professional dhol player was ironically a big part of my inspiration to becoming an online matchmaker! So I have actually always loved dancing and listening to bhangra, which eventually led to starting a bhangra team in college, and later learning to play dhol. So not only do I attend a lot of friends’ weddings these days, but as a dholi I am also booked to perform almost every weekend and have attended every type of wedding you can imagine! Over the years, I’ve also seen plenty of Sikh-Sikh, Gujarati-Gujarati, etc. weddings, but felt that I rarely saw Hindu Punjabi’s marrying one another – at least in the NYC area. Over time, it seemed like one of the reasons for this was a lack of outlets for those people to connect and meet other HP’s.

UA: I understand that this isn’t the first time you’ve created a product targeting the South Asian audience.  One of your first mainstream techie projects was a very successful app for the iPhone called the “Dhol Player.” Can you please elaborate for our readers about that project of yours and will you be releasing the app for other platforms?

So the idea for the Dhol Player app originally came from a conversation I had with my cousin and a couple close friends in the tech space.  Just as I noticed this current opportunity in the online dating market, we had a similar epiphany when we found almost no Indian music themed apps out there back in early ’09. So we combined some outsourced talent with our own team to develop the app and released it about a year ago. It was especially exciting as we had Bikram Singh, a good friend and of course a phenomenal artist, get involved and sample some exclusive vocals for us! We eventually named it after my own “Dhol Player” entertainment business, which is detailed at www.dholplayer.com, and also includes a direct link to download the app!
Although we’ve seen some great success and popularity with it, there have since been several South Asian themed and even dhol-specific apps released for both the iPhone and other operating systems. So I think for now we’re not planning to expand to other markets, but who knows what will happen in the future. I’m also just trying to focus my energy on one business at a time, so at present HinduPunjabiMatch.com has top priority!

UA: Is there anything else you would like to add and say to UrbanAsian.com’s readers?

First off, if you’re interested, definitely sign up while it’s free and be sure to tell your friends and family!  Second, I just wanted to give some respect to UrbanAsian.com for the great work they’re doing spreading the news in the community, so be sure take advantage of outlets like UA to stay in the loop!

UA: Thank you for those kind words Manish.  Best wishes for your website!