UrbanAsian.com earlier reported to you that Floridian, Anand Vasudev, was one of the contestants on Donald Trump’s latest season of The Apprentice.  Unfortunately, after a texting incident, Anand was fired much earlier than viewers and his fellow contestants had expected.  After this controversial exit, Anand made a triumphant return on the show last week as part of Team Brandy in the final 2 episodes.  I caught up with him to discuss his experience on the show, the unexpected firing, and life afterwards.

UA: Let’s start at the beginning (and no not to the time when you were born), but how did you decide to take part in The Apprentice and how were you selected?

AV: I was actually relaxing at home jet-lagged after a long trip, and I was watching Celebrity Apprentice when there was a commercial with Mr. Trump saying that they were casting for the original Apprentice once again. I had always been a fan of the show, so I decided to give it a shot.

UA: Were your family members supportive of your being on a reality show, or were they hoping that if you were on TV it was going to be in a Bollywood movie? 🙂

AV: My parents were well aware of The Apprentice and what kind of show it is. They know my strengths as a businessman, so they were very supportive of me being on it. And of course if it led to some sort of Bollywood career down the line, I’m sure they would be pretty pleased!

AV: The first time I met him was actually during the casting. He came down and surprised us by sitting at our table. I’m always cracking jokes, so he and I quipped back and forth a couple of times and I had a feeling he liked my personality. His hair is REAL!

AV: Interesting or annoying? Everyone was very interesting in their own way. All 16 of us have different backgrounds, histories and have been through a variety of hardships in recent months. As far as annoying, I’d have to agree with the 5 million viewers out there… It was David.

UA: From all the contestants, who would you say was your best friend and closest ally?

AV: During the show you have to keep your friends close and your enemies even closer. I had great chemistry working with Steuart and Brandy. Stephanie and I butt heads in a couple of episodes but we worked very well together when we were on the same team.

UA: Do you still keep in touch with any of the contestants?

AV: Even though we were all competing against each other, we’re all pretty close due to the fact that it was such a unique experience for us. Since the show ended, most of us have remained in touch. There are a couple of people who live here in the New York area so we get together occasionally and hang out.

UA: This one has multiple parts: What was the shooting schedule like? From what you filmed, how much would you say actually appeared in the final cut? Do you think contestants (including yourself) were depicted as they actually were during the shoot, or has the edited version been made to change the light in which we view contestants?

AV: Each episode, if you take out the commercials, is about 40-45 minutes long. Each task probably had anywhere between 30-40 hours of footage that needed to be edited down. There was so much great material and several storylines that didn’t even make the final cut! I think there were a few people who probably didn’t get depicted ideally throughout the season and it’s not very fair, but that’s show business!

UA: In celebrity versions of The Apprentice, contestants have been encouraged to text contacts to come and buy their goods. Your having texted in this season, however, resulted in your firing. How do you think Mr. Trump found out about the issue? Do you think your friend (whom you texted) sold you out, another contestant sold you out, or did Mr. Trump and his staff check contestants’ phones and laptops?

AV: Nobody sold me out. I sent a text mid workday when my friend was busy at the office. There was no way for him to come to buy a pedicab ride. I just figured it was worth a shot. After each day, the producers log all the emails, phone calls and texts that were made (we use company phones and laptops). I was juggling so many things that day as project manager, I didn’t even think that what I had done was so bad!

UA: What was first thought when Mr. Trump brought up the issue in the board room? Do you wish you had admitted it upfront to him, and do you regret having made the decision to text?

AV: When Mr. Trump asked me if I had sent a text message, keep in mind that this was 3 weeks later. I didn’t even remember sending one. I honestly had no clue what he was talking about until he started to read the message. At that point I remembered but it was too late.

I definitely regret sending the message because clearly I didn’t need to. Our team pummeled the girls team by 300% with genuine hard work and good management. I wasn’t trying to lie to Mr. Trump in the boardroom. I simply just didn’t remember. It’s unfortunate because I think I could have won the show! 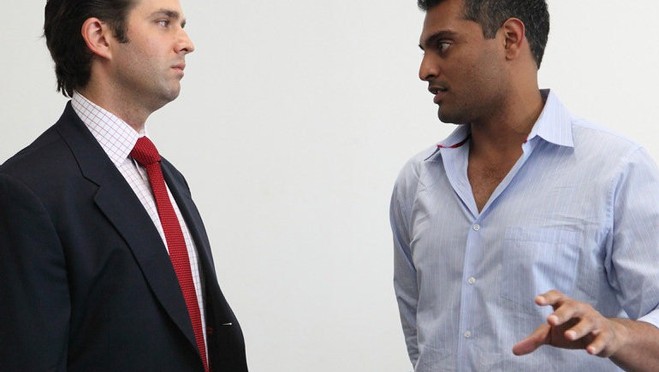 UA: Were other contestants also involved in activities which would have broken the rules and do you think Mr. Trump or his staff are aware of these happenings?

AV: There were definitely some questionable activities that took place amongst the other contestants, but they didn’t get caught for them. Unfortunately for me, although my intention was innocent, I got in trouble for it and paid the price.

UA: How has the texting impacted you job-wise (or are you still getting good offers)? What is next for you in the world of business?

It hasn’t impacted me negatively at all. I did a lot more great things on the show than bad, and I think viewers got a feel for all of the strengths I bring to the table. There are a lot of interested companies out there. We’ll just have to see what happens next!

UA: Most people thought that you would be Mr. Trump’s next Apprentice. Now that you are no longer a contender, who do you think should win?

AV: I think most people thought right! But unfortunately now that I wont be the Apprentice, I think Brandy really has what it takes. She’s brilliant, very cool under pressure, and Mr. Trump has a soft spot for pretty girls!

UA: Having made it through one reality show, do you think you may take part in another reality show – like The Bachelor? ;P

AV: Haha, anything’s possible! I really had fun filming The Apprentice and I learned so much about the reality show business. If the right show came along, I’d definitely have to consider it.

UA: What was your reaction when Trump contacted you to make a comeback in the finale? Were you glad you were chosen to be on Brandy’s team?

AV: Mr.  Trump reached out to me because he felt I was a very strong player throughout the competition. I was very happy he chose me to come back and I was even happier that I got to work on Team Brandy!

UA: Do you feel you redeemed yourself with your performance in the come back? Which task would you have wanted if you were in the finale?

I definitely think I redeemed myself in the finale. I was given several responsibilities and handled them all very professionally. A lifelong sports fan, I had a chance to work with several retired professional athletes and comedienne Kathy Griffin. They all applauded my work and character after the task was over. Had I been in the finals, I would have wanted to throw the golf tournament instead of the banquet too!

UA: Is there anything else you would like to add / say to the readers?

I have so many great fans and supporters out there. Thanks so much for following me this season and keep a lookout for me in the near future. You’ll hear from me again soon! You can follow me on Twitter at www.twitter.com/avasu01 for periodic updates.

UA: Thank you for taking the time to do the interview!