Looks like Cupid is no longer favoring couples in Bollywood.  After the rumored Salman-Katrina break up, it seems that Karisma Kapoor is the next star with whom Cupid is now feuding. 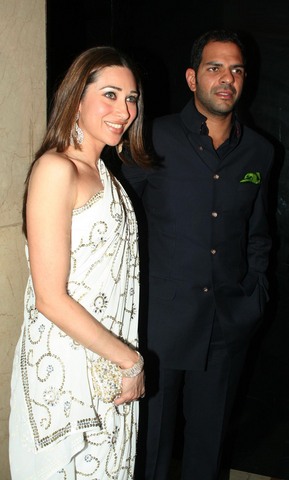 Apparently,  yet again, Karisma and Sanjay’s marriage is on the rocks!  Their marriage wasn’t one the industry had ever expected, but it was essentially Karisma rebounding from the much publicized break-up with Abhishek Bachchan.  Sanjay’s been considered a playboy as even after marrying Karisma he supposedly continued to have intimate relations with his ex-wife, Nandita Mahtani.  Despite these rumors, Karisma and Sanjay had their first child, daughter Samaria in 2005 – 2 years after their marriage.

As Karisma had admitted on Dus Ka Dum, she has to check his phone constantly to make sure he isn’t cheating behind her back.  A dispute had also arisen between the two when Karisma refused to move to Delhi from Mumbai.  Perhaps she’s still hoping to make a Bollywood comeback?  Shortly after, there were rumors the two had separated as Karisma was living in Mumbai with Samaira, but without Sanjay.  The two then patched up and Karisma gave birth to her second child, son Kiaan Raj Kapoor.

All was going well, until now.  Recently, Sanjay has been spotted with a Delhi-socialite  who is a model and divorcee.  The new “couple” has been spotted several times together and on-lookers reveal that anyone seeing the two together would immediately realize they are more than just friends.

What does 2011 hold for this couple?  Will Karisma make a come-back?  Should she make a come-back?  I always thought Karisma-Sanjay were an oddly matched couple, so my crystal ball suggests they will break up and Karisma will return to Bollywood.  What do you all think?