Move aside Sima Aunty, there’s a brand new dating show on the block and it’s bringing a whole new set of rules. If you follow Popshift on social media, you’ve probably seen photos and behind the scenes snippets of an exciting new show that’s coming to your screens soon. From fuzzy lavender blindfolds to casting calls for singles, I know you’ve been wondering what exactly this whole thing is about. So we tapped in with Popshift Founder Raghu Alla, who gave us the tea on what’s been brewing behind the scenes to answer all of your questions.

“Like most other people, South Asians are on dating apps, meeting people through people, or simply struggling with the dating process as a whole,” Raghu said.

It’s very different from what’s depicted in mainstream media, like Netflix’s Indian Matchmaking, where you depend on someone else to find you a suitable partner, and pray that your stars are aligned. Popshift is on a mission to capture those silly, special, and awkward moments between real people to bring you an authentic perspective on South Asian dating, one that’s relatable and illustrates how different South Asian personalities date and connect.

Raghu explained that the whole point of the show, DESI ME DATING, is to normalize dating and the process of it, which is not something you get to see much in South Asian media. “It takes different people, connections, and personal growth to go through the process of dating, and it’s necessary in order to find something ultimately meaningful at the end of the day,” he added.

The message of the show tells audiences that it’s okay if the first date you go on doesn’t spark all the butterflies, and it’s okay if even after four dates, you don’t think you’ve met your future spouse. Dating can help you discover more about yourself which is equally as important.

“We know that Indian Matchmaking on Netflix was a huge hit during the peak of the pandemic, but it was kind of like two steps forward, one step back in terms of South Asian lifestyle and dating,” Raghu said. He explained that although it brought South Asian representation to mainstream media, it was one step backward because in reality, most modern South Asians don’t use matchmakers to set them up with potential dating candidates, (sorry Sima). 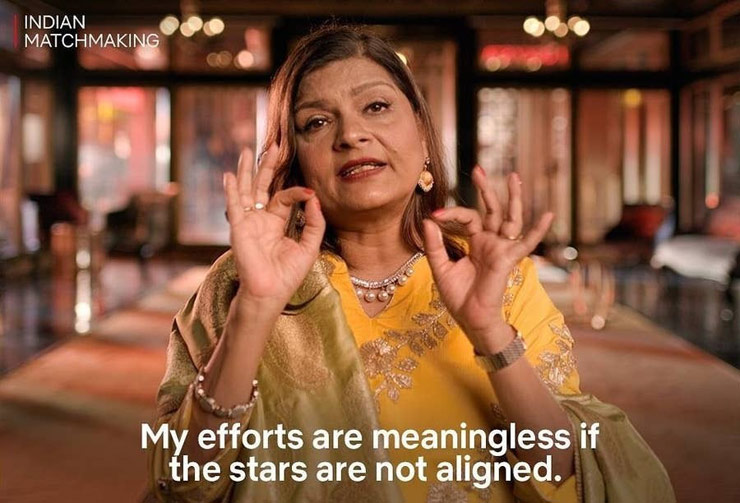 And so with a clear purpose in mind, the Popshift team went to work sifting through contestant applications to see who could be a good potential match with one another. “We wanted to highlight different South Asian personalities and take away stigmas about the ‘arranged’ dating process within our community,” Raghu explained. Dating contestants were then set up on blind dates where they didn’t know anything about the other person, including their name, age, or occupation.

“They met each other for the first time on camera standing literally 3 feet away from each other after taking their blindfolds off,” he said.

The participants got to know each other during a two-hour-long date, where they asked each other a series of personalized questions provided by Popshift. Contestants then had the opportunity to participate in a variety of activities together including mixology, an indoor picnic and even custom Maggi making.

“Although each date lasted a couple of hours on screen, we can hint that some of our contestants proceeded to hang out with each other on their own time after filming,” Raghu revealed.

The show will officially launch on Popshift’s YouTube channel on January 27th at 6:00 PM PST, with the potential to hit other major streaming services down the line, so keep an eye out for that.

*Popshift is looking to cast more straight men and LGBTQ+ individuals, so if you’re out there please apply.