It’s not easy keeping up with action superstar Akshay Kumar, as his Naam Shabana costar Taapsee Pannu can attest!

Taapsee, who is playing the lead role in Naam Shabana in which Akshay makes an extended cameo, spoke about how nerve-wrecking it was to do a combat movie with the action veteran:

“I was getting trained by people Akshay had assigned for me. They were taskmasters. He was not present during the training period so I don’t know how he is on the ground. But he sets the expectation meter very high, and it is very intimidating to do an action film where he is also a part of the film, as people expect that level of action.” 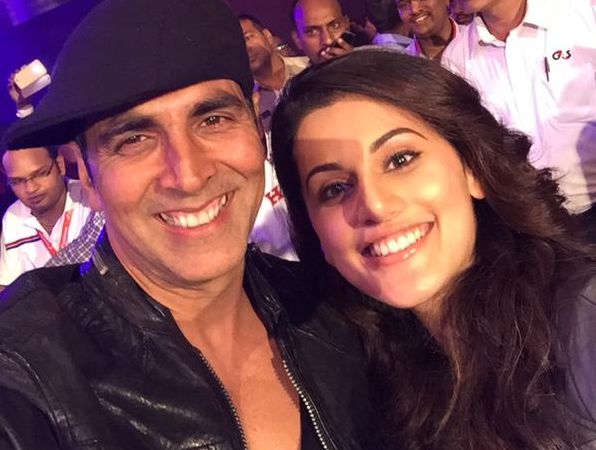 Taapsee went on to further praise her costar, saying:

“He is the calmest person I have ever met. He doesn’t get angry. He is extremely calm, contrary to the image that he has on screen of an action star. One thing which is common between him and his films is his sense of humor. The kind of films he chooses sets the standard high for actors. I look up to the lifestyle he follows, the way he conducts himself and the causes he supports are really good.”

Produced by Neeraj Pandey, Naam Shabana is a spin-off from the 2015 film Baby, with Taapsee reprising her role as Shabana. Manoj Bajpayee, Anupam Kher and Prithviraj Sukumaran also star in supporting roles.