Today’s film though was a tough one to see. To sum up my general thoughts…the first half of the film was flavorless, exhausting and simply not appealing. The second half kept me at this, “oh its getting better” feel and then suddenly something occurred on-screen that wiped that thought away instantly. 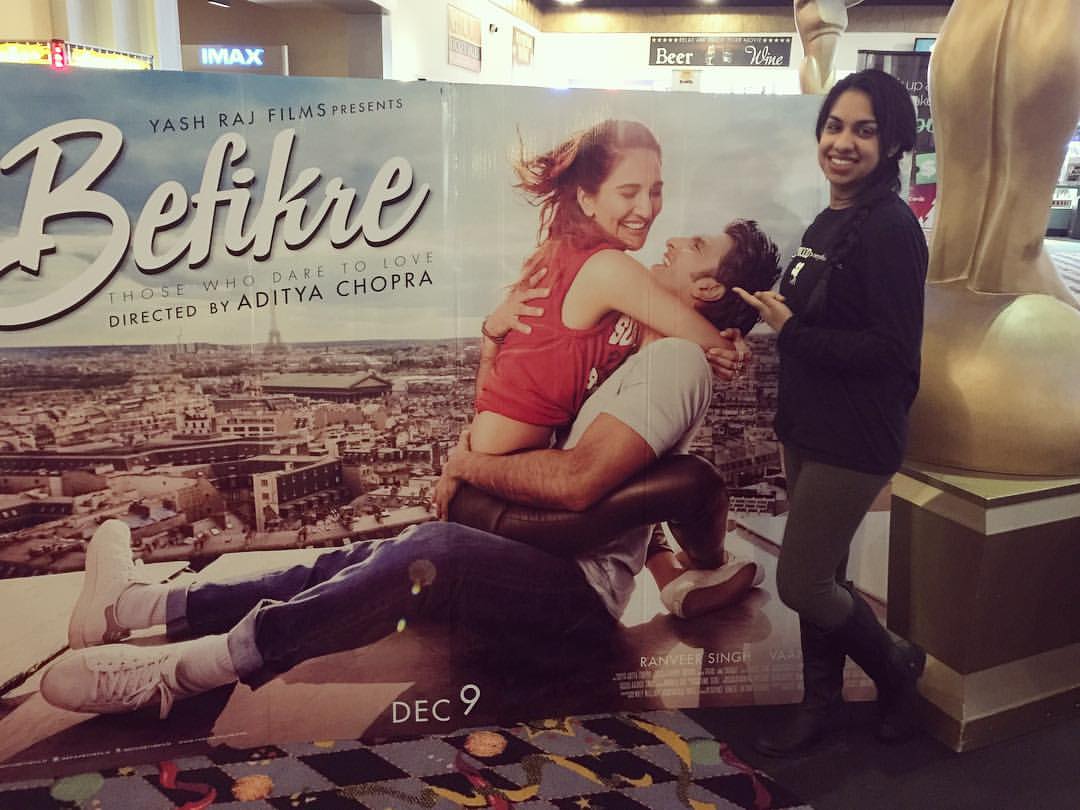 To elaborate my thoughts, Befikre – Those Who Dare to Love was practically a plotless rom-com film mixing 90’s style filmmaking into a Parisian semi-modern day lifestyle. And this simply did not work for me. And its unfortunate to say, but there were no beautifully written dialogues that I can carry on outside of the film like most classic Yash Raj Films do.

The film had potential at points, and like I mentioned earlier, there were times I felt it was going to pick up. I can’t stop thinking about the ONE scene in the entire film I enjoyed the most and was totally swept into. Not to give away, but a very classic YRF moment was portrayed on-screen and it was a heated-romantic-intimate dance-off between Vaani Kapoor and Ranveer Singh’s characters under a beautifully lit gazebo. Vaani was adorned in a flowy red dress, and Ranveer in a crisp black and white tuxedo. I instant turned to my mom during this scene and mentioned the Dil Toh Pagal Hai dance off between Karishma and Madhuri.

Speaking of our leading actors…well it was disappointing outside of their impeccable dance showcase in this scene and in the track Nashe Si Chadh Gayi by Arijit Singh. Vaani entering into her second film playing the role of Shyra had no personality to herself other than defining the title of the film ‘being carefree’. Her expressions were constant, there was no differentiation between sad, in-love, and carefree. Ranveer who has transitioned from Bajirao to Dharam…well they just aren’t comparable performances. One is exceptionally flawless and the other was a character full of slap-stick humorous jokes, and another clear cut version of someone being ‘carefree’. Perhaps this is all Aditya was scoring to convey, but neither character left any affect on the audience at all.

The music of the film was good, but I haven’t been so hooked to it since its released. If anything I’d kill to listen to the gazebo instrumental dance sequence track over and over again. The romantic Paris locations were beautiful, but its Paris so there are simply no flaws there!

All in all, Befikre was truly a disappointment and like a friend of mine said to me during the interval it should have been titled, “Bore-fikre”. And to conclude don’t let the french kiss lip locking action fool you, it has to be one of the most un-romantic on-screen kisses I have had to see over and over again.

Urban Asian’s review of Befikre is