New York City is known for many things, but one of the things it is well-respected world-wide for is its thriving theatre scene. Although most people associate theatre with productions on Broadway, there are many unique projects and production houses that exist beyond the “theatre district”and are “off-Broadway” productions that are worth supporting as well. One such production house is Hypokrit Theatre Company. The company was founded by Arpita Mukherjee and Shubhra Prakash. This talented duo earlier attempted a modern re-telling of Shakespeare’s classic Romeo and Juliet. And now, they are back with not one, but two new productions that continue their trend of re-imagining classics. The first is a modern-day Devdas (presented by Junoon Performing Arts) and the second one is Chokher Bali presented as a Greek tragedy. I had a chance to see both the productions. I’ve shared my opinion below. (Note – Versions I saw were Devdas featuring Cast A and Chokher Bali featuring Green Cast, so the review is limited to those two casts presentations).  Overall, I would say it is worth watching them both to support newer talent.  This is the last week to catch either on stage.

Both Devdas and Chokher Bali are running every day until November 20, 2016 (click here for tickets) at The Theater for the New City.  Devdas (The Lover) is choreographed by Swarali Karulkar, and Choker Bali is written by Partha Chatterjee and directed by Arpita Mukherjee. 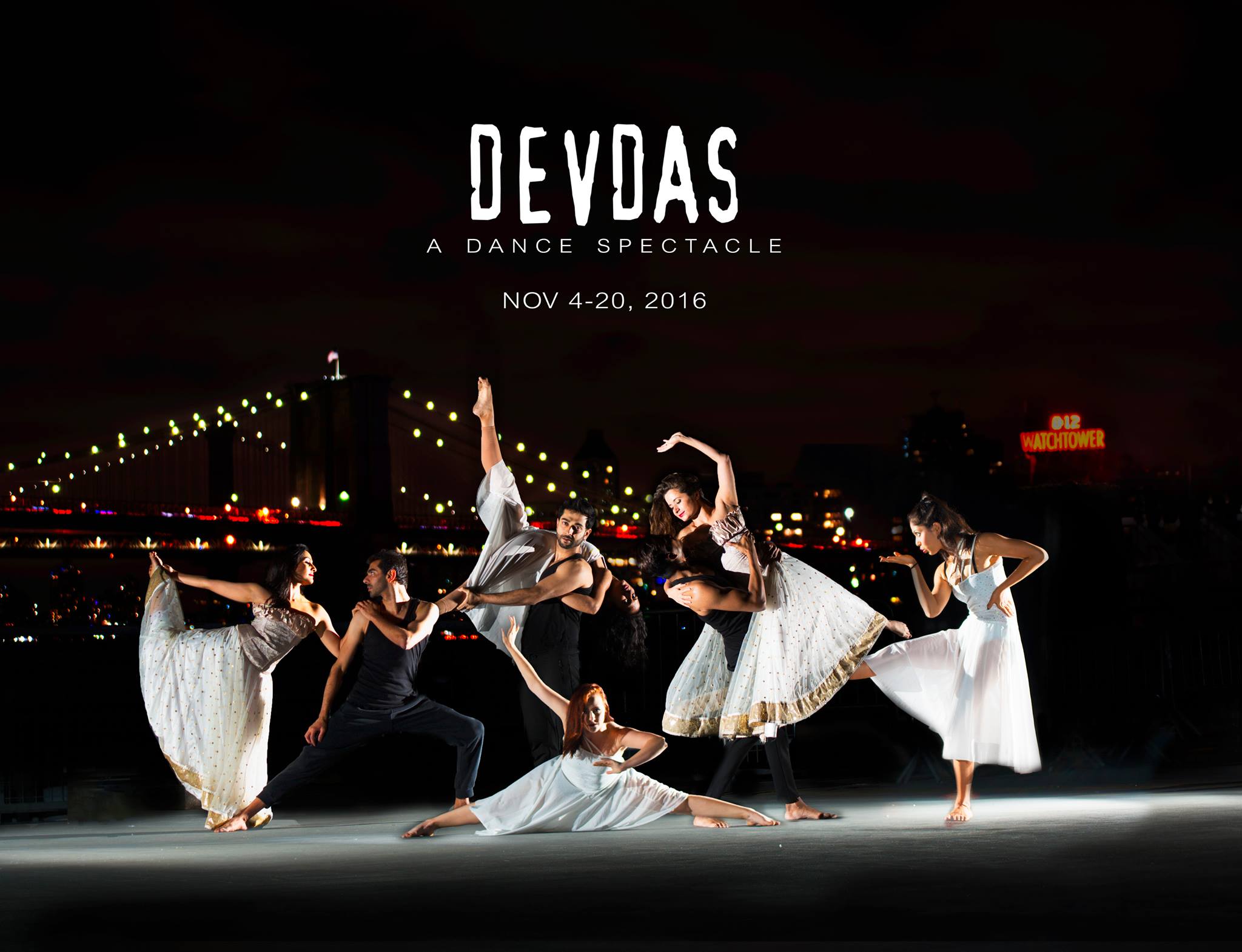 Devdas – a modern day dance spectacle is set in India’s hyper-competitive and hyper-masculine reality dance competition world. It’s the story of two women who coveted both, the main prize and the man. Devdas will be portrayed from the point of the two women that loved him through a ballet set in modern India. This theatrical presentation will use original music composed by Aalap Desai, and contemporary choreography by Swarali Karulkar.

Whenever one remakes a classic, one is already playing with fire because the baseline work has already set the bar much higher than one would expect for an original work.  Devdas is a tale that almost every single person of Indian descent is familiar with due to two iconic Bollywood adaptations of the film – a black and white version with Dilip Kumar as the lead, and a more recent version with Shahrukh Khan as the lead.  I’ve read the book and seen both versions.  So, the bar was already set really high.  While in the original work and movies, the plot revolves around Devdas – the male lead, Hypokrit’s version, is set in the “hyper-competitive world of India’s Dance Reality shows” and is described as being presented “as it’s never been seen before – where women rule, and love and loss is just a transaction.” Unfortunately, this point did not resonate as well when viewing the play.  Unless one had read this description, it was hard to tell it was from a female-centric point of view.  Perhaps, that fact got lost in the mix as it was presented as a dance ballet rather than a traditional play.

This is not to say that the play is not worth a watch.  I would say it was a nice attempt and a great concept, but there was much more to be desired story-wise.  I felt one really had to know the basic Devdas plot before going in to see the production because it was very loosely based on the original work.  I’m not sure how easy the presentation is to follow unless that foundation is already there.  This version of Devdas may have resonated much better with the audience if it had been presented as a unique work, rather than labeling itself as a Devdas re-telling.  Plus, the plot was more so commentary on the state of reality shows in India in modern times and the corruption that often comes with such shows.

Nevertheless, the dancers in the cast all did well with their roles as given.  The lead dancers – Shivani Badgi (as Paro) and Aditya Madiraju (as Devdas) did an excellent job dancing and emoting.  Both were perfectly cast as Paro and Devdas.  As a dancer myself, I couldn’t help but notice their lines and movement to make sure all was well… and boy was it!  One could tell they are extremely well-trained.  Both the dancers had clean lines, pointed their feet, and connected well.  Shivani excelled best in kathak-based sequences, but also did well with modern movements and lifts.  Aditya managed to emote well when he had to showcase Devdas’ jealousy and pain.  The other two leads, Adam Bourque (as Mr. X) and Ruby Verma (as Chanda), were also exquisite dancers.  Ruby Verma expressed the best out of the cast and really showcased her character’s pain.  Sankalp Sharma did well as Chunni Babu.  It was hard to tell that his character was supposed to be Chunni, since in other versions Chunni is more like Devdas’s best friend.  Here, Chunni played more of a role of a “ringmaster” and acted as a link between the dancer’s world and the live audience.  It was also hard to tell if he was supposed to be a positive character or negative.  Still, Sankalp did well with his role.

Overall – Devdas is worth a watch, but don’t go in with pre-conceived notions of the story.  You won’t really be able to find many elements of Devdas as presented in the book or Bollywood.  However, it is worth a watch if you love dance! 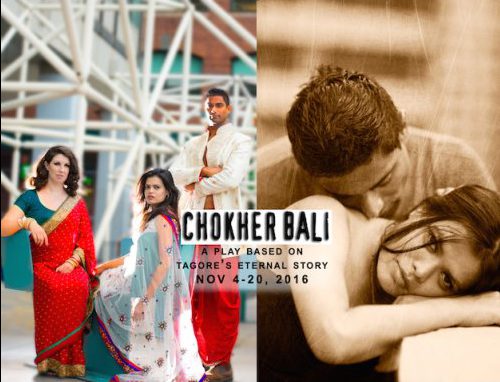 Chokher Bali is an exploration of the life of widows in 20th century Calcutta, in which our one particular widow Binodini becomes entangled and forbidden love triangle. The performance is adapted by Dr. Partha Chatterjee from Rabindranath Tagore’s novel of the same name. Hypokrit’s performance of Chokher Bali will be adapted as a Greek tragedy and showcase the world of 20th Bengal as it relates to the world now.  Chokher Bali uses movement by Rujuta Vaidya and is directed by Arpita Mukherjee.

Chokher Bali was presented in a more traditional theatrical format – with dialogue and more interactions between the characters.  Compared to Devdas, I would say it was more cohesive and easier to follow (even for those who had not read or seen the movie).  Personally, I’ve read the book and seen the movie version (starring Aishwarya Rai, Raima Sen, and Prasanjit), so as with Devdas, I was really looking forward to seeing the take Hypokrit had on it.  I felt Chokher Bali was adapted well for the stage – it had dialogue as well-as musical interludes which helped signal transitions between scenes.  Also, it was interesting to see it in the format of a Greek tragedy with the addition of a “chorus” that helped the story move forward.

Perhaps, because there was dialogue in Chokher Bali, it managed to connect so much more with the audience than Devdas did.  For Chokher Bali, one did not need to have read the original work to understand the plot-line and connect with the characters.  In terms of the story-line, it could have been tightened up (some songs felt unnecessary and some of the character graphs could have been better), but overall it was a good attempt.  Plus, at least with the cast I saw present the work, I felt that they all did justice with what they were given.  The main leads of the version I saw were Gerrard Lobo as Mahendra, Monique Sanchez as Ashalata, and Shubhra Prakash as Binodini (aka “Chokher Bali”).  Kabir Chopra played Bihari, and Zenobia Shroff played Mahendra’s mother Rajlakshmi.  The supporting cast included Mahima Saigal, Gautam Gurnani, Morgan DeTogne, Kritika Dey, and Jack Quint who all formed the chorus on stage.

Gerrard is definitely a born performer and truly shined in his role as Mahendra.  He had the audience’s attention from his very first moment on stage.  He was able to create chemistry with both Monique and Shubhra as his romantic leads.  He also interacted well with Kabir and Zenobia’s characters (with whom he presented a more subdued side of his character).  His dialogue delivery was great, had clear diction, and he projected his voice well.  Gerrard really helped the character of Mahendra come to life on the stage.  He was perfectly cast as Mahendra.  Monique did a great job showcasing the relationship between her and Gerrard’s character, and also did well in her interactions with Zenobia and Shubhra.  She brought a sense of innocence to her character.  The tension between Monique’s character and Zenobia’s character was portrayed well by both actors.  Zenobia was excellent in her role as Mahendra’s mother.  One could tell Zenobia was an experienced actor, as from the entire cast she seemed to have absorbed her character’s personality the most.  Kabir did a good job too with his role as Bihari.  Although the character wasn’t on stage as frequently as the others, he managed to portray the character with honesty.  The main singer and chorus also did well with their parts – all had beautiful voices, and added to the production with their pieces.

As for Shubhra Prakash (co-founder of Hypokrit), she was the perfect Binodini.  When it comes to Chokher Bali, the title character is what really drives the play forward.  So, the casting for the titular character was very important.  Shubhra seemed to thoroughly understand the character, seemed to really have studied Tagore, and helped showcase the character’s journey.  She also had a beautiful voice in her Bengali song renditions.