We caught the film Dishoom a bit later, but definitely did get to watch it and have a few mixed feelings about the film.

The Rohit Dhawan directed action adventure film truly was an adventure for me. I was taken into Rohit’s world of unrealistic action-thriller, and comical dialogues which were quite corny. The larger than life film had a some flaws, but there were still many aspects of the film that kept me in my seat and ready for the end to come. 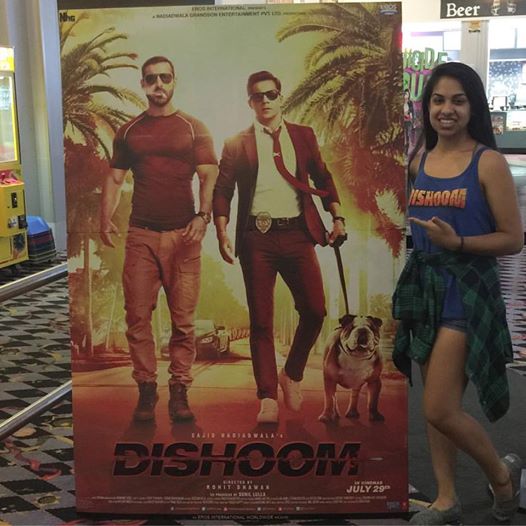 For starters I’d have to say the film is extremely attractive. The on-screen eye candy both male and female was purely jaw-dropping. From John Abraham’s and Varun Dhawan’s speedo boxer short scene, to Nargis Fakhri’s hot bikini special appearance. Jacquline Fernandez’s perky-sexy character and of course the most talked song of the year Parineeti’s appearance in Jaaneman Aah. And how can we not forget to mention Akshay Khanna who returned to the big screen after a while totally held the suspenseful aspect of the film together.

The films story wasn’t anything super extraordinary, it was a combination of many action adventure films. But what had me at quite a shock was the dialogue delivery from every single actor on-screen including ones not mentioned above were extremely ‘scripted’. There wasn’t a point in the film where I felt Varun was actually Juniad and John was actually Kabir, and this goes the same with all the other characters. You see this occur in smaller independent films every now and then, but very rarely on the big screen. In addition the dialogues were quite corny and when Akshay Kumar appeared on-screen in a Scottish Kilt and a man-bun with the track Subha Hone Na De playing in the back…I was quite turned off.

Aside from all the attractive actors on-screen, the locations were gorgeous and cinematography of the film was really good. I think the other aspect which held the film together was the catchy upbeat music by none other than Pritam. Sau Tarah Ke and Jaaneman Aah have to be my two favorite tracks of the film!

Dishoom was an entertaining film, but definitely not worth seeing it in cinemas. I definitely wish the dialogue delivery of the film was smoother and each individual actor put forth more towards their characters.

Urban Asian’s review of Dishoom is,