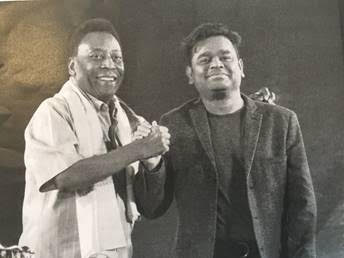 Rahman, who is about to embark on his Intimate Tour in the UK, is bringing his unique style to the big screen. Widely regarded as one of the greatest football players of all time, Pelé’s biographical film focuses on the Brazilian footballer’s early life. Directed and written by Jeff and Michael Zimbalist, the film is centered on the relationship between the character Pelé and his father.

“We were very careful not to go overboard. The song definitely doesn’t sound Indian, but gives the movie the energy which it needs. It’s not too regional but for the whole world.”

Best known for his great hits in Indian cinema, Rahman is no stranger to film score. His work on movie Slumdog Millionaire not only earned him a Golden Globe, two Academy Awards and two GRAMMY’s, but also accelerated his rise to an international platform. Commenting on his latest venture, Pelé: Birth of a Legend, Rahman says giving background score for a film is easier than  creating a stand-alone song. He says:

“Movies have this charm, where you just have to follow the story. Music is just a part of filmmaking, whereas a stand-alone song has to hold for itself. Scoring is much simpler than writing an individual piece of music.”

As one of the world’s most renowned composers, Rahman has enjoyed an  extraordinary career since the 90s and was already a massive and highly sought after talent in his native India. Having achieved international success, he is now a major player in the mainstream arena, with Pelé: Birth of a Legend being his most recent project.