They fall, they rise, and they march ahead relentlessly, through extreme climatic conditions. Siachen Glacier.

The world’s 2nd longest glacier has come to represent the resilience and fortitude of the Indian Army. It all started in April 1981 when the Indian Army made history by traversing the uncharted Siachen, also known as the Third Pole.

On the occasion of the 35th anniversary of this daring expedition, Eros Now, the leading OTT platform of Eros International Plc, announced today a ground breaking initiative, Salute Siachen, India’s first-ever celebrity expedition to the Siachen Glacier. The unique expedition will see nine celebrity adventurers from different walks of life, retrace and relive that journey. The 20-day expedition flags off this Independence Day (August 15) from Leh, and will culminate at Kumar Post, named after Colonel Narinder “Bull” Kumar, PVSM, KC, AVSM, MacGregor Medal, IMF Gold Medal, Padma Shri, Arjuna Award, FRGS. Bull Kumar planted the India flag on the Siachen Glacier in 1981 and became the first person to scale the uncharted Siachen from its freezing snout to its icy source.

India’s much-loved celebrities have come together to take this arduous journey to salute the courage of our soldiers who man the posts there in conditions of extreme adversity. Popular Bollywood actors Arjun Rampal, Arunoday Singh, sports personalities – cricketer Rudra Pratap Singh and hockey player Yuvraj Walmiki, TV heartthrob Rannvijay Singha along with Namrata Gujaran, Hasan Zaidi, Shlok Sharma and Sonnalli Seygall are in this select squad. 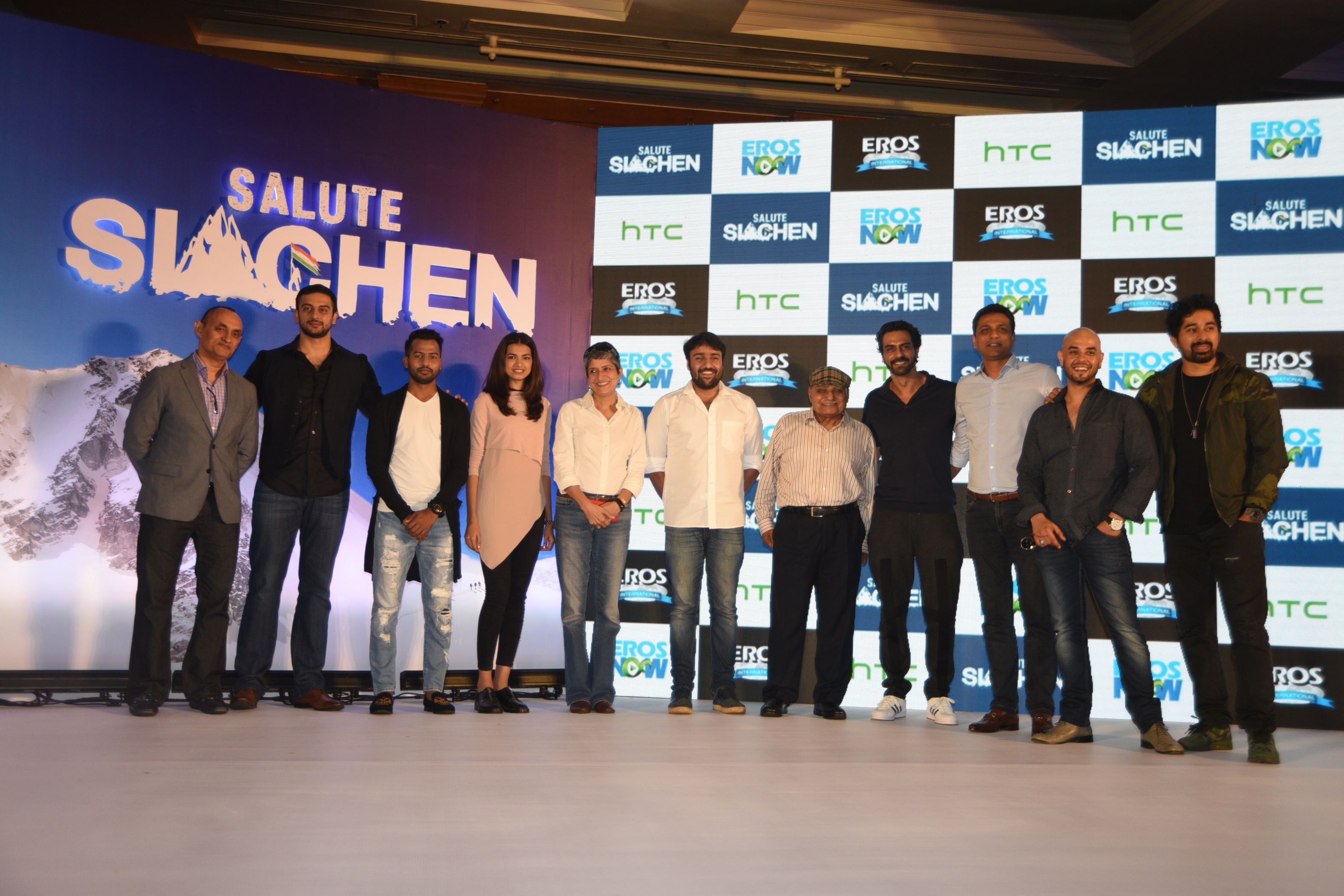 The celebrity participants have undergone rigorous training and prepping for the expedition which will begin with a five-day acclimatization trek to Stok Kangri base camp near Leh. Once geared to face the journey ahead, they will proceed to Siachen Base Camp for the expedition to Kumar Post. They take with them the goodwill and gratitude of an entire nation as we join them in saluting Siachen…!

“We are very excited and proud to launch this initiative on Eros Now. We have gathered a team of notable individuals who have come on board in support of this mission to Siachen and become ambassadors in expressing the nation’s gratitude towards the valour of these brave soldiers. Eros Now being the front runner in the digital landscape believes in pushing boundaries and creating path-breaking content such as this initiative”.

“Salute Siachen is Eros Now’s landmark initiative, getting together much loved faces from the world of Bollywood, Television and Sports, to traverse the icy frontiers of the Siachen Glacier, giving the world a glimpse into the lives of our real heroes at Siachen. This epic journey will be documented by the adventurers and showcased on Eros Now.”

When asked about this expedition, Col. Kumar said,

“Of all my exploits in the mountains, this was the most pivotal one for me. For the first time, I was leading an expedition as a soldier of the Indian Army, not just as a mountaineer. I wasn’t just doing this for myself or my team, this was for the entire nation. Thirty-five years later, I am very happy that civilians from all walks of life are going to Siachen to see for themselves the hardships our soldiers are undergoing there, and to show them that their efforts are being appreciated by a grateful nation.”