Since Bhai-fever is firmly in the air with Sultan, keeping with its batty tradition, Y-Films brings you two Behens to feverishly follow! The wackiest Indian series to premiere on the internet, Ladies Room will have two of the wildest YRF characters, the bffs (Best Friends Forever) Dingo and Khanna, setting the internet on fire with their crazy antics. Two episodes from the series are now out on the Y-Films YouTube channel for free, and a new episode will follow every Tuesday. 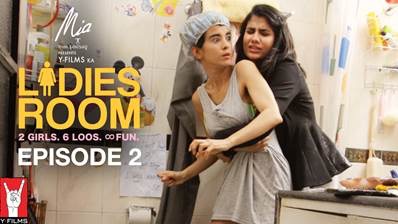 Starring two actresses from the YRF talent roster in its lead, the talented Saba Azad, last seen in Y-Film’s Mujhse Fraaandship Karoge and more recently ‘The Big Date’ on Love Shots and an electrifying new find, Shreya Dhanwanthary, the two soul sisters, or, err, dil-se-behens, behave – and misbehave – in a way you’ve never seen in Bollywood so far. These girls are mad, bad and completely unapologetic about it!

The series shows two modern young ‘girl bros’ struggling to grow up even as they grow old, as we follow their mental adventures in six loos. Episode one of the series has the two girls getting caught by a cop in a train loo with some unlawful maal while episode two follows the behens as they have a loo disaster in the apartment where Dingo’s been living illegally.

In the next four episodes of the six episode series, the show will tackle issues ranging from unwanted pregnancy to unwanted d**k pics, and boldly go where no man has gone before, living up to its tagline in more ways than one!

“The women’s washroom is a sacred space, where shit happens – literally & otherwise. A place where girls groom, gossip, laugh, cry, bitch & more. Women will find it completely relatable and guys will hopefully get the answer to the question that’s been troubling mankind forever – why do women go to the loo in groups! We’re thrilled to have a partner like Mia from Tanishq on board who help us make the girls and the show even cooler than it already is! 😉 Just like Dingo would pick up Khanna if she falls – right after she finishes laughing at her – we’re glad they’re on board to watch our backs!”

The series is directed by Ashima Chibber, whose directorial debut was the hilarious critical and commercial hit, Mere Dad Ki Maruti. The comedy features the writing of Ratnabali Bhattacharjee and Neha Kaul Mehra and holds the singular feat of never showing men in their entirety.

Ladies Room is the third Y-Films original series after the hugely success Bang Baaja Baaraat, which was recently nominated at the Series Mania Festival in France, and Man’s World, which was made in association with the United Nations’ Global Goals for Sustainable Development. The two series have garnered over 20 million views on YouTube so far and Ladies Room promises to follow in their footsteps!