The recently released trailer of the much awaited film Azhar was truly worth the wait! The trailer gives audiences a glimpse into Mohammad Azharuddin’s journey from being the most celebrated batsman to the most controversial figure in Indian cricket history. Here are 8 hair-raising scenes from the trailer that will totally give you goose bumps!

The accusations are hurled by Lara Dutta’s character against Azhar, as Emraan is seen walking through the pavilion onto the field to loud cheers of the crowd. 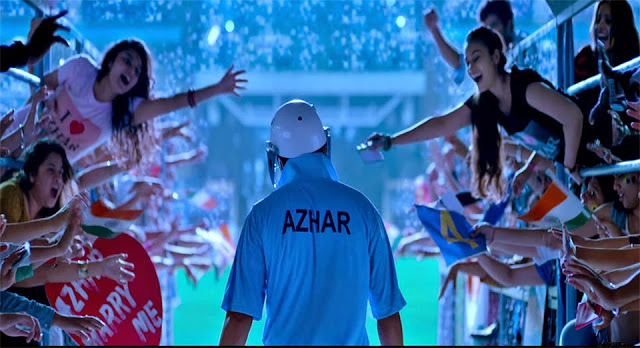 The series of montages of the mob and media gatherings surrounding Azhar’s match fixing scandal is definitely a scene you will go back to watch again!

Azhar’s befitting response to a Pakistani cricketer saying “Hamari taraf aaja, Allah hamare saath hai’’, this dialogue has become one of the highlights of the trailer.

The epic entry of Emraan Hashmi doing the Azhar walk as he gets onto the field is overlayed by the wisdom words from his beloved nanu jaan, who was his inspiration and huge reason behind being a cricketer. It’s great to see people walk with their purpose so clear.

5. “I would like to dedicate this award to someone very special. Sangeeta, this award is for you.”

When Azhar dedicates his win to his girlfriend Sangeeta, Prachi Desai AKA Naureen’s emotional response to watching her husband dedicate a win to another woman is surely worth a watch!

How one day changed the life of this celebrated cricketer completely. This dialogue definitely makes you want to see how the movie explores Azhar’s side of the scandal

This is an absolute “Whoa!” moment when the man himself spurts out the taboo words. As an audience member, it makes you really wonder, did he or did he not? Why would he ask this question? It piques the curiosity levels as this is THE question everyone is seeking the answer to.

And lastly, the dialogue that raises a million questions about the game of cricket, which is like a religion in India!

Watch the thrilling and explosive trailer of Azhar below!

Based on some well known incidents and facts of former Indian cricket captain Mohammad Azharuddin’s life, Azhar is directed by Tony D’Souza. The film stars Emraan Hashmi, Prachi Desai, Nargis Fakhri and Lara Dutta along with others. Produced by Ekta Kapoor, Shobha Kapoor and Sony Pictures Networks, the film is slated to release on May 13, 2016.