By now you may have heard about the controversy surrounding Nestle’s Maggi noodles allegedly unsafe for consumption. A Delhi government spokesperson said that 10 out of the 13 samples tested for lead content in the super popular food item found amounts higher than permissible limits. Several other states are also testing the product and if Maggi fails the tests, Nestle’s woes will only deepen and could reportedly lead to a ban of Maggi. 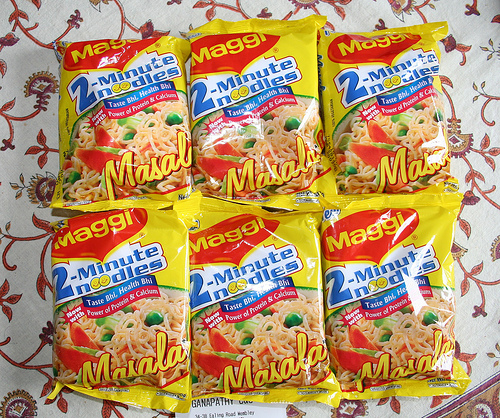 Reportedly, a Bihar court has asked authorities to file an FIR against the officials that make Maggi noodles and celebrities, Amitabh Bachchan, Preity Zinta and Madhuri Dixit-Nene who have endorsed the product. The complainant, Sudhir Kumar Ojha claims that he fell sick after consuming Maggi noodles and has decided to file a case against the officials and the three actors.

The complaint has been filed under IPC sections 270 (malignant act likely to spread infection of disease dangerous to life), 273 (sale of noxious food or drink), 276 (sale of drug as a different drug or preparation) and 420 (cheating and dishonesty). Recently, Uttarakhand Food and Drug Administration had sent a notice to Madhuri for making “misleading claims” about Nestle India’s Maggi Atta noodles.

Madhuri posted on the micro-blogging site, Twitter that she has enjoyed Maggi noodles for years and was very concerned. She also said that she spoke to the Nestle team who explained that they always place consumers first.

Like most of India, I have enjoyed Maggi noodles for years. I was very concerned after recent reports and met with the Nestle team (1/3).

Nestle explained that they always place the consumer first and have the highest quality standards. (2/3)

Nestle has reassured me that they adhere to stringent testing for quality and safety and are working with the authorities closely.

Tell us your thoughts on this in the comment section below.