Madhuri Dixit in Abhishek Chaubey’s ‘Dedh Ishqiya’ plays the role of Begum Para and has recreated the nawaabi charm and ‘ada’. Madhuri will be seen performing Mujra on a song titled ‘Apke karar mein’ which is composed by Vishal Bhardwaj.

“The song is ready and we will be shooting for it after we’re done filming the entire movie. I can’t reveal much but I’ll say that it is a very elaborate number which will be shot on a big set.”

Dedh Ishqiya features Naseeruddin Shah, Arshad Warsi and Huma Qureshi. The film is produced by Vishal Bhardwaj and co-produced by Shemaroo Entertainment. Are you excited to see the queen of dancing back on screen? We sure are! Stay tuned for Madhuri Dixit comeback to the big screen! 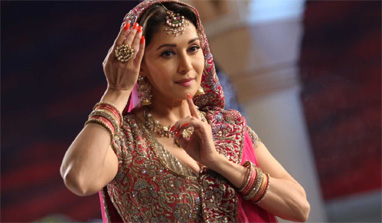