In the early part of the millennium India was given its first boy band: A Band of Boys. Very quickly they became the jaan of the nation as they danced and sang their way into the hearts of young girls all over India. From the get go, the young boys almost immediately managed to gain popularity, fame and even a movie. But what set them apart from the rest is their innate desire to make fun and young music. And even though the Hindi pop scene is currently witnessing a rather lengthy lull, the boys are still rocking and how! When they aren’t busy performing live gigs, they are in the studio making music. More recently, they’ve found themselves meddling in international music as they work on their first Hollywood soundtrack. The boys speak to Urban Asian about what’s new and where A Band of Boys have been!

First and foremost, everyone wants to know, where have you boys been? And what have you been up to?
Generally extremely busy in the live circuit! Lots of shows, lots of people to nachao and lots of fun to have. In the interim, we’ve just done a song for the Hindi language release of John Travolta’s ‘From Paris with Love’ [Paris ke Jalwe in India] and are at this very moment in the process of shooting our next video for our next release. More as and when that happens!

Back when the group was first established, Band of Boys was deemed India’s first boy band. How does it feel looking back now especially since the tag “boy band” is seen as very teen-boppish?
Well it felt young then and still makes us feel young now, especially during all those back breaking dance moves that we constantly have to do! We selected the tag ‘A Band of Boys’ as we wanted to keep it real. We were a band of boys and what better way to tell people that than to be called just that! And now, still very happy with the name as it clearly defines who we were, where we coming from, where we intend to go and what we intend to be…damn it, strangely we keep getting older! Probably will change our names to ABOOB – A Band of Older Boys – Before all those minds start wandering and literally translating that acronym!

What would you say set you lads apart from the numerous groups that followed after you?
Ummm, technically we’re built like any other boy band but what has seriously set us apart is our chemistry – again don’t read extra into that! We get along like a house on fire, and sometimes we’re the cause of setting that house on fire, and it’s really very important that we all have fun else we wouldn’t last – given all our egos and strong opinions on everything – which invariably differ! We trained for a year before launching ourselves and went through some serious crappy times. That was the bonding experience because you really know someone for who they are when they’re at their lowest rather that when they’re flying high and mighty!

You boys have been noted for making and singing music that is Indian yet contemporary, fun and hummable. How are you received when you sing live now? 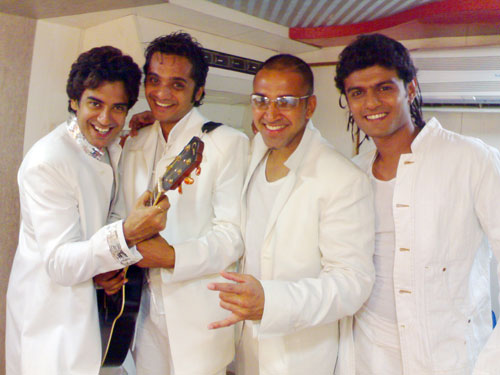 Nothing’s really changed! Our journey set off as not trying to define music or create a new sound. It was a journey of honesty towards our art and our expression. Fortunately, and sometimes to our detriment, we’ve for the most part of our journey stuck to that. We are at our best when we’re doing the live circuit. Studios can tend to get, ummmm, ‘black and white’, if you know what we mean. Lots of perfection, analyzing, recording in a vacuum, re-takes, etcetera. But live –, no re-takes! You get out there and kick some serious butt or walk back having yours kicked! Every moment is electric. Gauging which of us is going do something moronic, covering up a mistake a split second after it’s made, interacting with a hostile audience; it’s awesomely fun and always keeping us on our toes!

It’s been many years of you boys working together. How has your equation with one another changed?
The mega change has happened with each of us growing into our own independent spaces; pain in the ass as that means egos and opinions have grown! So we spend a lot more times analyzing stuff, giving gyaan, solving the world’s environmental issues and having all the solutions to the Indian debt problem! But the great thing is that we all are very clear in which direction the ship called ‘ABOB’ has to move and eventually every decision taken is made keeping that in mind. And at the end of the day, no matter how big any of us become individually, when we step into the rehearsal hall or recording studio or onto stage, it doesn’t matter because to the 4 of us, we’ll always be what we were when we started off : a bunch of boys with dreams in their eyes and innocence in their hearts. Oh my god! Quickly get the guitar! A new song is being born!

Amidst all the singing, a film happened: Kiss Kis Ko. How did it all happen? And what was reason behind the film?
We did a show in Jakarta, which accurately translates to we were partying on stage as usual, and this gentleman, Ram Punjabi, who happens to be a rocking TV and film producer in Indonesia saw us and kinda commented saying: “Hey, you guys have a great vibe about you and unbelievable chemistry. Would you guys be game about capturing that on film?!”. No prizes to guess what happened next! Of course, we did learn that the toughest thing about making a film is being as idiotic and spontaneous when the camera starts rolling as you are in real life. Kinda had a tough time putting that across but when it came to the music, we composed, and sometimes decomposed it, sang it, performed to it and totally had a blast! The movies not gonna get us any Oscars but hey, it’s a fun film and we totally partied our way through it – and to be fair, some of the not so kind to us critics have mentioned that – “it showed!” (laughs)

Do you find it difficult now when film music is more appreciated rather than pop music?
Hmmmm . . . Sore point! Definitely, though we’d rephrase that question! It’s not that film music is more appreciated; it’s just that they have the budgets and film stars to totally obliterate the Indipop industry! A consequence of which has been that the media too has all but stopped playing any Indipop artist, unless there’s a special deal going. So basically, yes they get appreciated because they get heard. The music is all the same but no one gets to hear Indipop. Help someone!

Since you’ve clearly mastered the pop music genre, what other genres would you all like to attempt?
The genre of honesty! We are honest about the fact that we we’re not, yet, Hariharan in our singing, Michael Jackson in our dancing, Andrew Lloyd Webber in our production and A.R. Rahman in our compositions. But hey, we’re getting there! No definable road, no shortcuts so can’t really tell you what we’d like to do or how. Just putting our heads together, fighting the current film music’s overwhelming tsunami and forging on ahead with stuff that we’d be proud to hear at the age of 80 too!

Okay rumors. Are you boys really headed to Hollywood to sing for a film? And if so, details please!
As mentioned earlier – Paris ke Jalwe (From Paris with love) was the first Hollywood collaboration and very positively received! Thanks to that, we’ve working on a couple of more offers but at the cost of using a cliché, you’re gonna have to wait this one out till we’re ready to announce it. Don’t wanna be sued for early revelations!

Which would you say is your favorite song from all your albums? Mine would be Nain Katari, on a 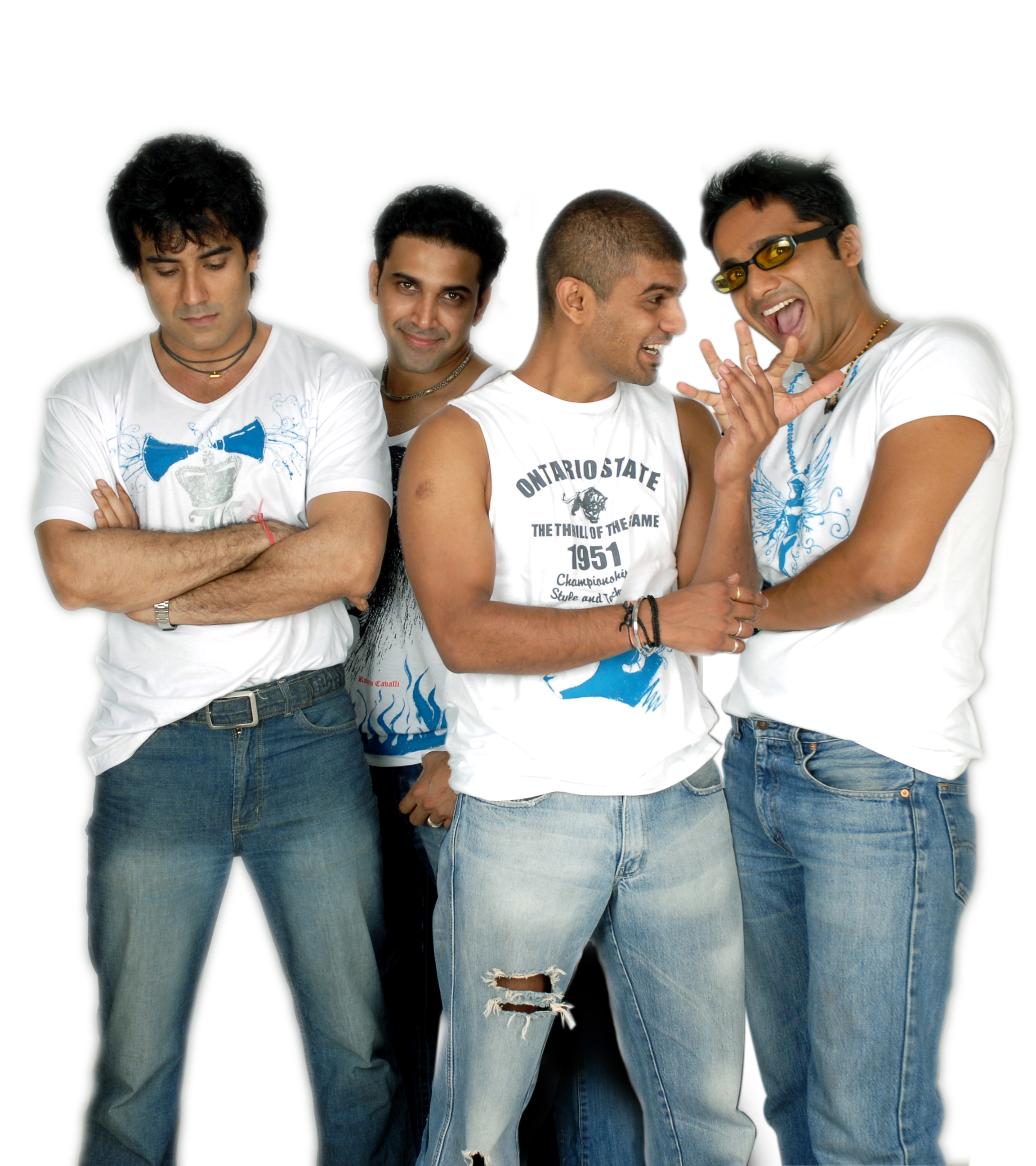 side note.
Tough one! But push comes to shove, we’ve kinda narrowed down on two : Gori, from the first album featured the bands mega hit song, Meri Neend,  which went on to become a massive hit itself and the second,  a much lesser known song from the Nain Katari album,  Jhoomegi Baharein, which is a quintessential love song which we’ve thoroughly enjoyed singing

So the ladies and girls love you lads. How do you deal with the fandom and love you are showered with?
With trepidation and a genuine smile on our lips and glow in our hearts! Any artiste would be lying to you if they said that they don’t if people love their art. Artistes essentially all have a bit of a megalomania monster lurking in them. Any form of an artiste’s expressions, be it painting, singing, music, dancing, are all geared towards being viewed and appreciated by the consumer. The appreciation eggs us on and we thrive off it too! So while we’ve had our share of the occasional psychos, overtly physically touchy girls, and guys, stalkers, irritating phone callers at 4am every night and mind numbingly frustrating pile-ons, we’re by and large extremely blessed to have been not just accepted but loved. Our youngest fan being a 6 month old, who doesn’t even know she’s our fan but we do as her dad told us that she gurgles whenever she hears our song Meri Neend, right up to a 76 year old lady who totally stole our hearts away! Basically, we are loving it! Thank you world and please don’t stop!

When will see you boys doing something fun next? More music? Another film?
Fly to the moon1? Swim across the pacific?! Settle down in the mountains!? Take up gymnastics!? Perhaps. But the music won’t stop! Don’t know in what form you will receive it or from which quarters but rest assured we’re aiming for you. And we hope to be gigging with walking sticks in our hands at 80 and using that piece of wood to whack all those people who try to grope us – it’ll probably be the other way around though!

Message to all your fans?
If you love doing something, do it! Life’s too short, as are some of us, so get out there and make the minutes count!