Way back in November, Urban Asian broke to you the possibility that Chhoti Bahu will be making a return to the small screen.  January 22, 2011 I posted a comment on that same article to confirm that Chhoti Bahu will indeed return, but in case you missed my comment, here are more details on the show’s big return. 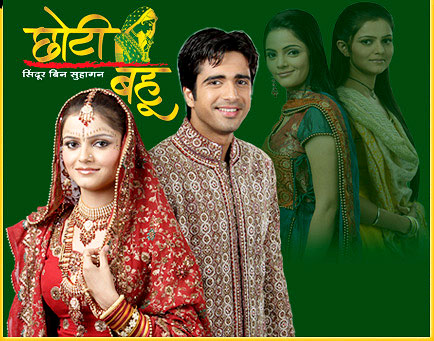 As of now, rumors are abuzz that the show will return on February 14, 2011!  The show is not a sequel, but instead is a fresh love story between Dev/Radhika.  While Season 1 made the focus of the show the love story between Radhika and Dev with Vrindavan as the background, Season 2 will have a whole new vibe.  As a source revealed, “It will be a completely fresh story with a new tag line which is being decided as of now. It will probably be on the lines of Chhoti Bahu: Ek Nayi Prem Kahaani. Though the initial story in Rawal will have a typical rural backdrop, the story line in Mathura which will be Dev’s household will have the needed urban elements in it”, the source also said. Though the show has changed it’s name to “Chhoti Bahu: Ek Nahi Kahani,” fans of the show will be happy to know that the leads of the show, Avinash Sachdev and Rubina Dilaik, will be back to reprise their roles as Dev and Radhika, respectively.

Zee and its production house, DJ’s Creative Unit, are hoping to take the show to a whole new level this season.  The source revealed that “This time the backdrop of the show will be Rawal, the place where Radha actually made her presence felt in order to fall into a divine and spiritual love story with Krishn, according to the Indian mythology. The story of the new version of Chhoti Bahu will begin in Rawal and will later move to Mathura.”

Another change in the show is that this time it will begin with Radhika-Dev as children.  “The story will start from the childhood version of the duo, and will take a leap later on. The leap is expected to happen after 10 episodes, but all will depend on the way the love story of the kids gets accepted by the audience”, the source added.

Casting is currently underway and shooting is supposed to start within the week.  If things stay on track, the show is slated for a return on Valentine’s Day – February 14th.  What do you all think of this new storyline?  Do you think Season 2 will be better or worse than Season 1?