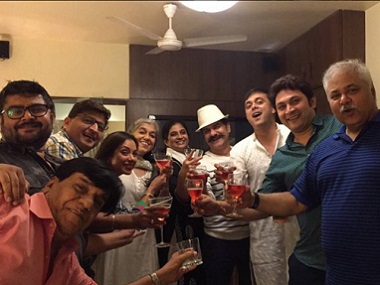 Yayy! There is good news for the fans of hit comedy show ‘Sarabhai Vs Sarabhai’! The actors and makers of the show, on Monday, took to Facebook to hold a live session for their fans.

Producer and actor JD Majethia re-introduced the characters and actors to the audience.

Ratna Pathak Shah (Maya), Satish Shah (Indravadan), Rupali Ganguly (Monisha), Sumeet Raghavan (Sahil) also joined the live video right from the sets of the new season. They were shooting a night sequence for the show when they were interrupted by Majethia and our favorite Rajesh Kumar (Rosesh).

Rupali, who plays Monisha, being in the character, asks what IDMB is after everyone was done talking about how the show is among the highest-rated on IMDb and Ratna Pathak, being in the Maya character, ignored her.

Check out the hilarious video right away:

The show will be released as a web series on Hotstar in May.

After this video, we are even more excited to watch SVS 2. WBU?