When one thinks of the word ‘Bollywood’, one immediately thinks of a larger-than-life spectacle… and that notion is exactly what the musical, Beyond Bollywood, embodies. Bollywood (i.e. the name for the Indian film industry based in Bombay (now Mumbai), India) is a film genre that focuses on escapism. It is meant to allow the audience to leave behind their ordinary lives, and experience life in a grander, more exaggerated way. This seemed to be the goal of the production as well. It is necessary to keep this mindset throughout the production to fully understand why the show is structured the way it is. From the moment the curtain lifts, and the music begins, it is evident that the audience will be transported into another world. As a film, theater, and dance lover, I can safely say, Beyond Bollywood is a journey one longs to take again and again.  The production is running in the London West End at the London Palladium (if taking the tube – Oxford Circus stop is the closest) until June 27th.  Buy tickets here.

I must admit, when I went to see the show, I was skeptical. I had read some pretty mixed reviews online, and so, wasn’t sure how the world of Bollywood would translate to the London stage. However, I noticed that most of these reviews seemed to be by non-Indians or those without formal dance training, so I figured maybe that accounted for any disconnect. Personally, I’ve seen many theatrical productions, have done theater in college, have seen other similar Indian dance productions, and am a dancer myself (trained in ballet, tap, jazz, Indian classical dances). I have also seen innumerable Bollywood movies, so I am not an uninitiated moviegoer. As such, I went to the production with my critic’s cap on, ready to actively scrutinize the show. Thankfully, the critic in me was more than satiated by the show.

Having seen the entire show, I am not sure why the production has not received more praise in the UK. It has all the right elements – gorgeous lead pair, immaculate dancing, and high-level production (dance, music, costumes, and SFX) – that really outweigh any minor flaws. Moreover, if one keeps in mind the fact that the show at its core is a dance show – and not a typical theatrical play heavily based in soliloquies and dialogue – it makes sense why the story was not made more complex. In my view, the story is simply there to help the segments connect together, and to leave a trail of breadcrumbs for the audience to follow as they navigate Indian dance. After all, the production is meant to bring India’s many dance forms onto a global stage, and to share these styles with a more western audience. The production is a modern theatrical production that showcases all the opulence and grandeur of India by utilizing hi-definition graphics in the background. I quite liked the idea of using such a dynamic background. The usage of an SFX animated background as opposed to more physical sets, allowed for seamless transitions from one number to the next, and allowed the dancers to be freer in their movements. The SFX really added to the larger-than-life feel that is so typical of the world of Bollywood, and allowed the focus to remain on the dancing, rather than set movement on stage.

The show starts out in a theater based in Germany, and begins with an amazing kathak performance by Pooja Pant, who plays the role of “The Mother.”  Just when you think that her kathak can’t get any better, it does!  The dance draws the audience in instantly, sets the stage for what is to come, and is essential to set up the story. The musicians and singers (especially the male lead singer and kathak dancer, Kumar Sharma) who accompany Pooja in a jugalbandi are also fantastic.  The male lead singer was also a wonderful kathak dancer who joins Pooja in a small duet.  Classical music elements tend to be missing in today’s Bollywood films, but those elements are really needed if one is to fully showcase what India is.  It was nice to see the production showcase such numbers.

The story then jumps to the modern day where Shaily (played by Ana Ilmi), who is a dancer like her mother (who has since passed away), is fighting to keep her mother’s theater from closing down. Her father is keen on selling it to rake in the money, but she refuses to let her mother’s dream (and now hers) perish so easily. Shaily is a modern jazz dancer, but she travels to India to discover her roots and learn about traditional folk dances. There, she meets Raghav (played by Mohit Mathur), a Bollywood choreographer who immediately recognizes her talent. Yes, the story is predictable, but these days, almost all movies/shows are. As expected, the two fall in love over the course of the show, but it is the sequence of dances and the chemistry between the stars that truly carries their relationship forward.

Ana and Mohit are wonderful dancers! You can tell they are both extensively trained and dedicated to dance. There was fluidity in their movements, they fully extended their arms and legs, had the right amount of energy, the right emotions, and never forgot to point their toes (as a dancer, that is something one can’t help but focus on). The two shared a sizzling chemistry that felt natural and not forced.  Ana and Mohit were on stage for almost all the dances, but didn’t drop their energy levels at all.  In fact, the two had lengthy dialogue following some high energy numbers, but they brilliantly managed their breathing to transition into the dialogue.  Ana and Mohit were born for these roles!  One can’t imagine any other couple in the lead.  They are both such versatile dancers, and truly did justice to their respective parts (in the realm of dance as well as acting)!

As for the backup dancers, they too were very precise in their movements. In fact, all the dancers – lead pair and backup alike – danced as though they were the main focus on stage! The backup dancers were as much the stars of the show as the lead pair!  Also, Sudeep Modak (“The Father/Ballu”) does a great job with his characters – the serious father, and diametrically opposed, comic role of Ballu. His comic timing was perfect. 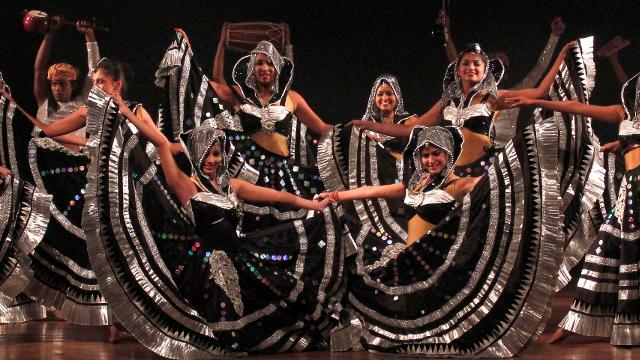 Evaluating the show in its entirety, the production deserves a 5 out of 5 for the dancing, acting talent of the leads, creativity, production quality, and sheer energy all the performers brought to the western stage!  Rajeev Goswami did a wonderful job writing, choreographing, and directing the production. Although some of the dialogue wasn’t as strong as it could have been, it was evident that some of the jokes may have been more effective back in India.  Music producers Salim-Sulaiman and lyricist Irfan Siddiqui did a good job with the music. My only complaint with the score is that I felt that every single track should have been unique to the show – some tracks were famous numbers from Bollywood films.  However, these are minor flaws in an otherwise solid show, so no points have been deducted.

Beyond Bollywood can easily be considered the heart of India – whose beat is shared with the audience through dance. The show is geared towards both experts of Bollywood (i.e. audience members who have seen Bollywood films, or are well-versed in Indian music and dance), as well as those looking to experience the world of Indian cinema, dance, or music for the first time.

At its core, Beyond Bollywood is basically an Indian movie that is brought to life on stage. The production is a reflection of changing times in Indian cinema – where directors are trying to find the right balance of catering to a western audience, without losing their ‘Indianness’. As such, the production is meant to remind us all that it is okay to ground ourselves in our history, that we must learn from our history, and that when embracing modernity, we should do so without sacrificing our roots. The production is a must watch for anyone who loves dance or that wants to experience Indian dance. Be sure to check it out on its limited run at the London Palladium (buy tickets here).

Been with Urban Asian since Day 1 and am Editor-In-Chief of the site!