Comedian Vir Das recently, posted an open letter on Facebook – ‘Twitter Bad? Facebook Evil? or We Stupid?’– and got vocal about his thoughts on the recent tragedy that struck the Tharoor family, and why social media is far from being blamed.

Vir Das who had tweeted-

“Hell hath no fury like a woman with your password”- referring to the spat that took place on Twitter, got media journalists asking the humorist if Twitter was responsible for the calamity that befell the reputed personality and his family. The satirist poured his heart out, expressing his views on how matters are sensationalized, and later blamed on social media platforms for any mishap. 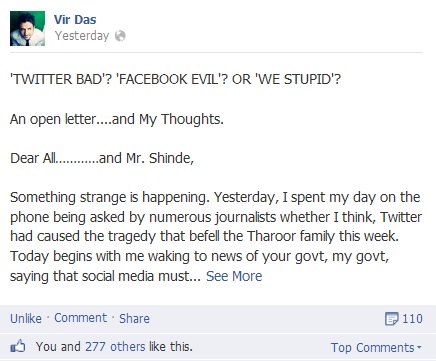 “We are now seemingly afraid of a medium that was specifically designed for sporadic and uncontrollable expression”, said Vir, whose post has been making the rounds on Facebook. Laid out in the most articulate way possible, Vir Das expressed his views against the defamation of social media platforms, which are being pointlessly blamed for any controversial incident that touches it.

He supported Twitter, mentioning how it has helped us in the times we needed it the most – the Delhi Gang Rape case. It gave us a platform, like always, to voice our opinions and put it in front of our government, when we needed it, the most. Twitter is a platform which gets help to many, when they require it-then and there. Vir, in as many words, stated how we, the users of social media platforms, are completely responsible for what we write on it. The platforms are for us to make optimum use of, get real time information, sound intelligent, get witty and many other things. It is up to us to have a moral compass, and exercise it. We are responsible, Twitter isn’t.

Signing off, Vir, at his wittiest best, concluded, “With regards to the future, I think I can speak for a comedy community and a fair amount of citizens when I say: While it’s still legal, I’ll see you in my next tweet.”

The post can be viewed here: http://on.fb.me/19GS7aB What do you think was he wrong in voicing his own opinion on social media? We all do it and yes that’ means you as well reading this. Is it bad is it good that we do such things via social media, does it protect us or does it really kick us back in the butt for doing such posts or tweets? What are your thoughts?