Veteran actor, Kader Khan, will be making his television debut on a new comedy show on Sahara One along side Reshmi Desai (aka Tapasya from “Uttaran” on COLORS) as the female lead. 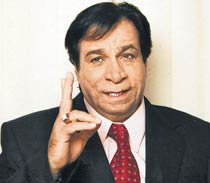 Kader Khan, best known for his comedic acting, has acted in over 300 movies and written numerous dialogues for movies as well! Kader Khan has been MIA from the Bollywood scene for a while now, and back in 2009 he began teaching in Dubai. Khan was a civil engineer before he began acting and used to teach in Mumbai also.

“I am not teaching civil engineering but languages Urdu and Arabic,” said Khan. “I am associated with Brands International and hopefully will set up the K K Institute of Arabic Language and Islamic Culture at Knowledge City in Dubai.”

Looks like Kader Khan is taking a break from teaching to make a come back on television! This is the first time he will be a regular on a television serial! The show is said to be titled “Hayee Padosan” where Kader Khan plays the landlord of a cosmopolitan area and Rashmi Desai is one of his tenants and the female lead of the show.

Other popular stars on the show include Muni Jha, Sejal Shah and Neelu Kholi who all play other tenants. The comedy is about how they all interact with one another in their day to day lives. The new show will replace “Bitto” on Sahara One.

Maybe it’s just me, but doesn’t this sound a bit like “Tarek Mehtha Ka Oolta Chashma” on Sony SAB?