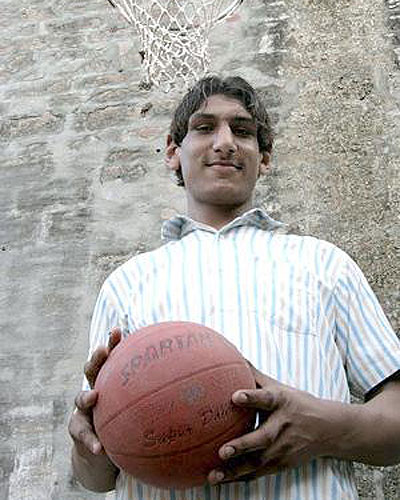 If you think of the word “desi” I doubt the first image that comes to your mind is that of an NBA basketball player. There has never been a draft pick to the NBA from India, but it is quite clear why 14 year old, Satnam Singh Bhamara, may soon change that perception for the better.

The 14 year old Indian currently towers at 7 feet – though it is expected he’ll still grow. At 250 pounds, Bhamara wears a size 22 basketball shoe and has tall genes! His father, Balbir Singh Bhamara towers at 7’2″ and his grandmother (father’s mom) is 6’9″! Tall by any standard! It was Satnam’s father who inspired him to play basketball. Satnam says his father wanted to play basketball, but his grandfather had said no. Now, Balbir (Satnam’s father) wants to see his son fulfill his dream of playing for the NBA.

6 weeks ago Satnam made his first trip to the US. He is 1 of 29 student athletes (both male and female in three different sports) from India who will train at the renowned training school IMG Academy in Bradenton, Fla. Dan Barto (directer of player development at IMG) said, “Satnam is on track to be a very, very good long-term basketball player. His biggest weakness now is our biggest strength here when it comes to developing players — neuromuscular firing — overall body control. His potential is pretty amazing.”

Is Satnam poised to become the next Yao Ming? What do you all think?