Director James Gunn will begin posting a behind-the-scenes photo from ‘Guardians of the Galaxy Vol. 2’ every day up until release of the film. Kicking off his series of pictures was a BTS shot of Dave Bautista as Drax The Destroyer.

“I will be posting a  #GotGPicoftheDay every day from now through the movie opening. They’ll be composed of behind-the-scene shots from Guardians of the Galaxy Vol. 2 I took on my iPhone, my Leica Q, and a few select unseen set stills. Here’s the first one, Dave Bautista (Batista) as Drax in quite a mess. This was uncomfortable as all get out for Dave but, as usual, he puts up with many feats of discomfort to make the Guardians great. #GotGVol2#Drax#movies“. 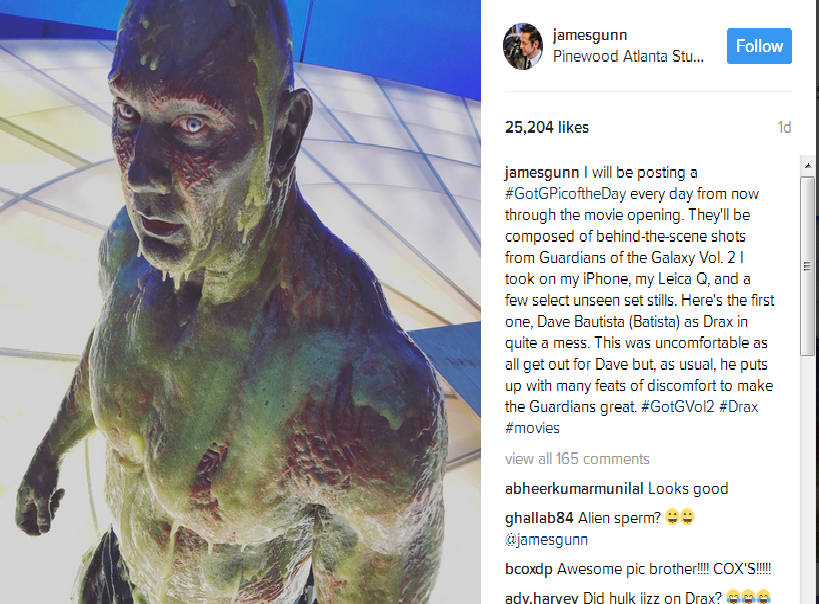 ‘Guardians Of The Galaxy Vol. 2’ stars Chris Pratt as Star-Lord/Peter Quill, Zoe Saldana as Gamora, Bradley Cooper as the voice of Rocket Raccoon, Vin Diesel as the voice of Groot, Michael Rooker as Yondu, Kurt Russel as Ego The Living Planet, Karen Gillian as Nebula, Dave Bautista as Drax, Pom Klementieff as Mantis, Sean Gunn as Kraglin, and Sylvester Stallone in a currently unknown role. The film is directed by James Gunn. The movie is scheduled to release on 25th April, 2017.